Alabama’s Republican candidate for the senate, Roy Moore, has been accused of criminal sexual contact with multiple teenage girls. The youngest of them was only fourteen years old when Moore was a thirty-two year old assistant district attorney. These allegations are serious and profoundly disturbing. And while Moore is denying the charges, some of his GOP colleagues are already calling for him to drop out of the race. They include John McCain and Senate Majority Leader Mitch McConnell. 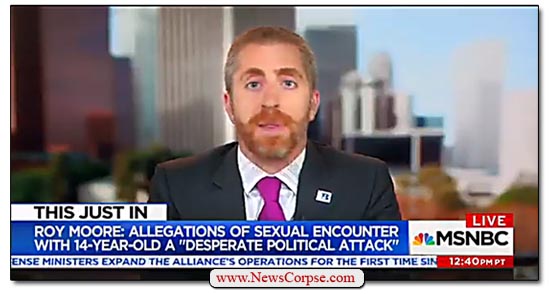 Among those not seeking Moore’s withdrawal is Joel Pollak, senior-editor-at-large for Breitbart News. Pollak was interviewed by Ali Velshi on MSNBC and had some startling defenses of Moore’s aberrant behavior (video below). Pollak began by falsely claiming that the story in the Washington Post wasn’t accurate:

What Pollak is asserting is that only the relationship with the fourteen year old is of concern. Therefore, he doesn’t think that a thirty-two year old public servant engaging in sexual conduct with sixteen year olds is any problem at all. That’s a position that most decent people will disagree with. Even if the age of consent in Alabama is sixteen, it doesn’t excuse Moore’s behavior. He’s still a much older man with the experience and power to dominate a girl that much younger. Anthony Weiner is jail right now just for texting a teenager.

Pollak’s knee-jerk defense of Moore is not surprising coming from Breitbart News. The website has been supporting Moore since the earliest days of his campaign. In addition to Pollak, Sean Hannity of Fox News has also come to Moore’s defense. He dismissed the charges as a mere “he said, she said” situation. Never mind that the Post cited dozens of sources.

The allegations against Moore also reveal something troubling about the Republican Party. They are quick to condemn liberals or Hollywood or Democrats for similar behavior. But when it comes to their own, Republicans and right-wing media circle the wagons. That’s why they can continue to back someone like Moore. And it also explains their continued support for Donald Trump, whose history of sexual harassment and abuse is well documented.

Breitbart Editor: "There's only one relationship alleged that was problematic." pic.twitter.com/ZK8EV0Y3vn