The spectacle of anyone at Fox News complaining about media bias is always an adventure in mind-blowing hypocrisy. The network created purposefully to disseminate right-wing propaganda has devolved into full fledged State TV during the Donald Trump administration. It’s entire schedule is populated by Trump-fluffers who unabashedly fawn over his every word and fiercely defend his innumerable lies, insults, and harmful and illegal actions. 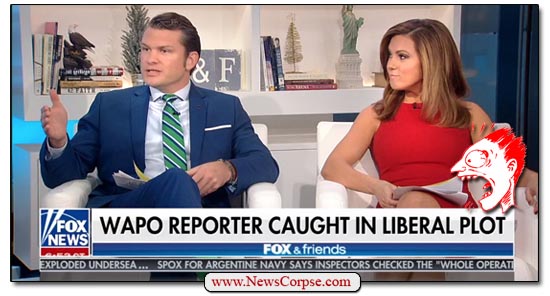 However, they may have outdone themselves this weekend with a segment on Trump’s favorite TV show, Fox and Friends (video below). Co-host Pete Hegseth found an article by the ultra-rightist Free Beacon that pretended to discover a covert liberal plot to meet with other liberals and talk to each other. Oh.My.God! It had all the elements of a wingnut nightmare: Nancy Pelosi, George Soros, and a representative of the lefty, mainstream, “fake” news. Hegseth stared vacantly into the camera and delivered this fearsome rant:

“A Washington Post reporter is under fire after she got caught attending a top secret meeting with the Democracy Alliance where Democratic donors were outlining their future of their progressive agenda. According to the Washington Free Beacon, that reporter, Janelle Ross, gave a presentation at the California event without notifying her superiors at the Washington Post. The paper says she’s been reminded that the Post discourages participating events that can be perceived as partisan. I wonder what would happen if the same so-called journalist attended an – I don’t know – a Koch brothers session.”

Let’s unwind this cognitive mess. First of all, the Democracy Alliance event was not “top secret.” It’s an annual affair that invites Democratic political dignitaries and donors. The notion that Pelosi, the Minority Leader in the House of Representatives, could sneak off to a clandestine gathering at a fancy resort without being noticed is just plain stupid.

The presence of the Post’s Janelle Ross may have stepped over the line of journalistic neutrality, but it was hardly a conspiracy. She’s a little known beat reporter who attended the conference on her own with full disclosure in the event’s brochure. It in no way reflects on the Washington Post organization as whole.

However, the worst part of Hegseth’s tirade was when he speculated about the reaction if a reporter were to show up at a conservative conference sponsored by famous right-wing billionaires like the Koch brothers. What Hegseth somehow failed to mention was that the woman sitting next to him and co-hosting the program, Lisa Boothe, is currently being promoted as a featured speaker at an upcoming conservative conference sponsored by, among others, the Koch brothers. And it bears repeating that she’s sitting right next to him.

This should prove to be the dumpster fire of the season. With 5 #FoxNews hosts, 3 disgraced Trump flunkies, and even pre-prison Donnie, Jr. #sas2017 pic.twitter.com/ER2oqNmVyx

Turning Point USA is a right-wing operation that is reaching out to millennials. It lists its partners as the Leadership Institute, Heritage Action, and the Heartland Institute. All of these are recipients of Koch funding. A glance at the event’s advertisement reveals that Fox News is deeply embedded in the affair. And it’s not just some backbenchers. The network’s anchors are proudly attending and speaking at the conference. They include, in addition to Boothe, Jeanine Pirro, Jesse Watters, Greg Gutfeld, and Brian Kilmeade.

Fox News is obviously an integral part of this conservative conference. You don’t have five anchors as featured speakers without having fully signed on as partners. Fox News has not issued any statement as to their participation or indicated that it violates any internal standards (I know. “standards” and “Fox News” in the same sentence is a joke). The abundance of well known Fox associates makes the actions of WaPo’s reporter seem trivial. But Hegseth and Boothe ignoring the hypocrisy of this segment is almost too ludicrous to believe were it not on video.