The good people of Alabama came through on Tuesday and elected the decent senate candidate (Doug Jones) rather than the racist, crackpot, pedophile (Roy Moore). That doesn’t absolve the a-holes in Alabama who voted for Moore, but it’s an encouraging sign that positive changes are coming. The only way to characterize this outcome is as a monumental transformation for a state that hasn’t elected a Democratic senator for a quarter of century. 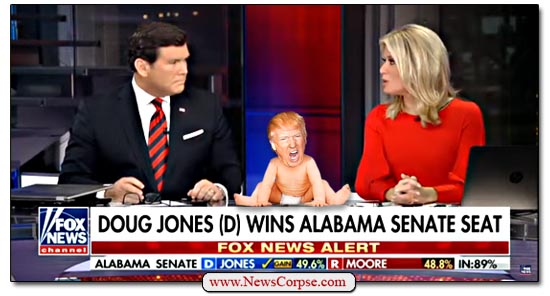 But leave it to Fox News to find other ways to characterize such an obviously anti-Trump, anti-Republican event. And it only took a matter of seconds for Fox to try to recast the Jones win as something positive for the GOP. Anchors Bret Baier and Martha MacCallum were plainly unhappy with the call. Less than a minute after announcing that Jones would win the senate seat once held by Attorney General Jeff Sessions, Fox went into hyper-spin mode saying this (video below):

MacCallum: “You know there was a lot of discussion about whether a Roy Moore win would be a win, really, for the GOP. And there’s some questions tonight about whether or not there’s some silver lining, perhaps, for Republicans tonight. A victory by Moore, who was embroiled in a sex scandal, might have made it more difficult for the GOP to have gained control of the Senate in next year’s midterm elections.”

There’s so much to unpack here. Let’s start with the eagerness of Fox News to abandon Moore, the candidate they have been pimping for months. They are pretending that his loss is actually what they wanted all along. If they think this will be taken this seriously, it is a bitter insult to their dimwitted viewers. However, they know their viewers best, and they are probably right. The Fox audience would need a “silver lining” or a security blanket and a binky after what happened last night.

What’s more, by virtually conceding that Moore’s “sex scandal” would have been a major obstacle to the GOP’s electoral prospects next year, they are validating the very same case against Donald Trump. Actually, not quite the same. Trump has been accused by more women of more repulsive acts of harassment and abuse. If Fox News thinks that Moore’s loss will make those crimes go away they are deeply delusional. They will surely work hard to bury Trump’s reprehensible behavior, but in the comment above they have recognized that it cannot, and will not, be dismissed.

Finally, MacCallum’s phrasing is curious. The GOP does not have to “gain control” of the Senate next year. They currently have control. What she might be worried about is the growing possibility of Democrats assuming control of both houses of Congress. And once again, whatever difficulty she thinks the GOP would have had with Moore in the Senate isn’t going to be resolved as long Trump is in the White House.

Speaking of Trump, he also made an effort to distance himself from Moore after the loss. He tweeted that:

The reason I originally endorsed Luther Strange (and his numbers went up mightily), is that I said Roy Moore will not be able to win the General Election. I was right! Roy worked hard but the deck was stacked against him!

There is no record of Trump ever saying that Moore would “not be able to win.” What record there is of Trump’s endorsement was deleted from his Twitter feed (here and here and here). He also deleted a tweet congratulating Moore and cheering him on to victory. Ever since Moore won the GOP primary, Trump has been behind him. He even recorded a robo-call and staged a rally just across the Alabama border in Florida to whip up support. But following Moore’s loss, Trump has unceremoniously kicked him to the curb and proclaimed the he was right all along (as he always is in his sociopathic, narcissistic imagination).

These weren’t the only kicks Moore suffered. Other Fox News hosts were equally as dismissive. Ainsley Earhardt on Trump’s favorite show, Fox and Friends, said that “This was not a referendum on Trump. I feel like it was a referendum on Harvey Weinstein.” Her fellow “Curvy Couch” potato, Todd Piro, added that he didn’t want to be a “Pollyanna,” noting that the Republicans still have a one seat majority in the senate. Isn’t that a little too obvious an expression of Republican bias, even for Fox News? And Laura Ingraham giddily opined that “Jones is a lame duck from day one. He has zero chance of winning in 2020. This state loves Trump. This is not an anti-Trump result.”

For the record, Trump’s approval rating in Alabama, according to exit polls, was a 48-48 percent split, with “strongly approve” at 32 percent and “strongly disapprove” at 41 percent. Those are catastrophic numbers for Trump and Republicans in Alabama. And Trump’s approval nationwide is even worse. But don’t expect Fox News to acknowledge that. They are on a mission to implant happy-talk in the minds of their glassy-eyed viewers who need some cheering up. That, however, won’t last long. Fox has already segued to renewed outrage over Hillary Clinton’s emails and denigrating special counsel Robert Mueller as treasonous abomination of justice. Just another day of shrill propaganda for Fox News.