It’s the most wonderful time of the year. The season of battling a fake war on Christmas that has been raging for six weeks out of every year since Fox News decided it was a thing. And this year there is a new Guardian of Virtue who has arisen to make it safe for the persecuted Christians of America to stumble out of their basement sanctuaries. 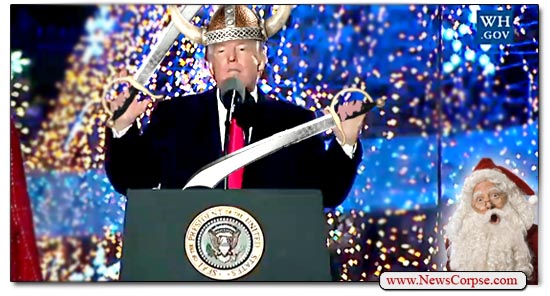 Donald Trump promised during his campaign that “If I become president, we’re all going to be saying ‘Merry Christmas’ again.” It’s that heartwarming 1930’s German-style totalitarianism that makes him think he can decide what we are ALL going to say. And it’s all the more meaningful coming from a greedy, lustful, gluttonous, wrath-filled, narcissist who insists that he has never had to seek God’s forgiveness because he’s never done anything to necessitate it. Now, making good on that campaign promise, Trumpy Clause has announced that:

People are proud to be saying Merry Christmas again. I am proud to have led the charge against the assault of our cherished and beautiful phrase. MERRY CHRISTMAS!!!!!

And you know it’s true because he used five exclamation points. Although it may be a bit unseemly to lie so brazenly while drenching oneself in pride as the leader of an imaginary assault, all in the name of a religious principle founded on charity and peace. And perhaps the hostilities themselves are an absurd and exploitative political hoax considering that most Americans are more than satisfied saying “Happy Holidays.”

But absurdity and exploitation, and even rank idiocy, never stopped political demagogues before, and they surely won’t stop this one. We’ll just have to tolerate it a little longer and hope that the new year brings real victory for the majority of Americans who are disgusted and embarrassed by the cretin occupying the White House.

Most of the nation will spend this day with their families enjoying the traditions that we have always honored. But what really makes America great is that we similarly honor those among us with different traditions and beliefs. It’s our diversity that has always been the source of our strength, and will continue to be in the future.

So in the spirit of the season, News Corpse would like to continue its holiday tradition by presenting a musical gift for the forsaken and forlorn. This is for all of those who are not huddled around a dead tree today, buried in colorfully wrapped packages. It’s for the cynics who won’t accept the notion that the birth of an alleged savior is an excuse to exchange material goods or fruitcakes that nobody likes. It is for outcasts and rebels and nonbelievers who are puzzled by the greed and commercialism that permeates the season. And yes, it’s for those who still believe that peace and goodwill are morally superior to profit and oppression. Here is Miles Davis and Bob Dorough performing the heartwarming traditional Christmas ballad Blue Xmas: