Fresh from his return from Fantasy President Camp in Singapore, Donald Trump is reconnecting with his friends at home. Even though he already misses his new BFF, Kim Jong Un (who he wants so badly to emulate), Trump tried to mask his sadness by lashing out at old foes in the media, which he regards as “our country’s biggest enemy.” 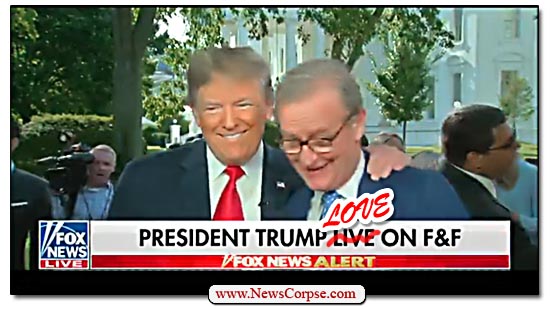 Watching from his bathroom window where he tweets his official presidential pronouncements, Trump saw his pals from Fox and Friends on the White House lawn and went downstairs to play. Unfortunately, he also ran into those meanies from the other news networks who keep insisting on asking him real questions, rather than the tongue baths he gets from Fox News.

In the course of a few awkward encounters, Trump managed to challenge his own record for lies-per-minute. He brazenly lied about the FBi’s Inspector General report exonerating him. It did no such thing. While it found some opinions expressed inappropriately by a couple of agents, it concluded that there was no bias in their work. It also found that all of the errors of judgment identified resulted in harm to Hillary Clinton’s campaign, not Trump’s.

He also lied about his administration’s heinous policy of ripping apart immigrant families. He blamed it on Democratic laws that do not exist. He lied about Paul Manafort, who he said worked for his campaign for only forty-nine days. It was actually 144 days during a critical period where he relied on Manafort to secure him delegate votes at the Republican National Convention.

But he wasn’t through lying yet. He blamed President Obama for Vladimir Putin’s invasion of Ukraine and annexation of Crimea. Naturally he wouldn’t blame his buddy Vlad, who he still doesn’t press to get out of Ukraine. And Trump also told a bizarre lie about the parents of Korean war dead asking him to bring back their remains. Those parents, who numbered in the hundreds, would have to be over 100 years old.

Perhaps the most telling exchange occurred between Trump and Fox and Friends co host, Steve Doocy. Trump revealed what is the highest priority of his presidency. In his banter with Doocy he said (video below):

Trump: You have a lot of fun, right? Supposing Hillary got elected instead of Trump. You think it would be so exciting? Your ratings would be way down. [To the camera] Number one show in the morning folks.
Doocy: Well, thank you. In cable news, that’s right.
Trump: Also beyond cable news you’re doing pretty well.
Doocy: We’re doing okay. Thanks for dropping by.
Trump: I like ratings. I study ratings.

So Trump is validating his election because it goosed the ratings for Fox News? And if Clinton had won their popularity would have suffered? That’s literally what he thinks is one of his great achievements. He even brags about his affinity for television ratings and his expertise in the subject. Never mind his prior statements that he doesn’t have time to watch TV because – documents.

It’s good to know that he studies ratings, because he sure doesn’t study legislation, economics, foreign policy, or any other prerequisite for being president. He’s obviously obsessed with his own ratings. He stages bill signings with silly photo ops where he proudly displays his penmanship before the gathered press corps. He frequently boasts about the attendance at his rallies and the ratings for his speeches, even when those numbers are embarrassingly low. And whenever there is a poll that shows him tick up a fraction of a point, he blasts it out to his Twitter followers, despite the fact that he remains in the thirties or low forties, and has never gotten near fifty percent.

This is what happens when a TV game show host with no experience in politics or governing is put in the White House by Russian cyber-spies and domestic white supremacists. Now America must endure until either Congress or the law enforcement authorities succeed in putting him where he belongs: a prison camp where he can make new friends with the same diseased morals that he has.

One thought on “Donald Trump, the Reality TV President, Seen Yelling at Kids on the White House Lawn”