Holy crap. This is one of those moments when it simply cannot be ignored that the Trump administration is deliberately falsifying reality in order to deceive their glassy-eyed Deplorables. The White House has brazenly disappeared part of the press conference he held with Vladimir Putin in Helsinki. And the purpose is painfully obvious. 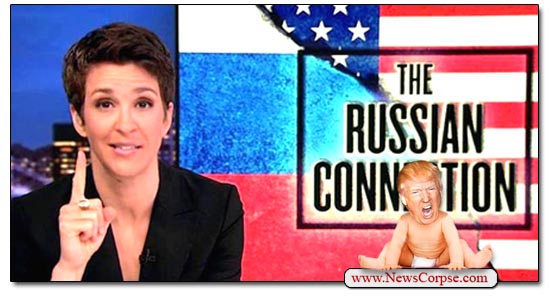 On the Rachel Maddow Show Tuesday, Rachel revealed that the official White House transcript had an omission that could not have been accidental. The video from Maddow’s show tells the whole story. But the gist of it this: Reuters reporter Jeff Mason asked Putin a question and got a surprisingly candid answer. After Putin replied to a question about assisting Robert Mueller’s special counsel probe, Putin and Mason had the following exchange:

Putin: That could be a first step, and we can also extend it. Options abound, and they all can be found in an appropriate legal framework.
Jeff Mason: President Putin, did you want President Trump to win the election and did you direct any of your officials to help him do that?
Putin: Yes, I did. Yes, I did. Because he talked about bringing the U.S.–Russia relationship back to normal.

However, that is not what showed up in the White House transcript. They omitted the first part of Mason’ question, making it appear that Putin was still replying to the Mueller question:

PRESIDENT PUTIN: That could be a first step, and we can also extend it. Options abound, and they all can be found in an appropriate legal framework.
Q: And did you direct any of your officials to help him do that?
PRESIDENT PUTIN: Yes, I did. Yes, I did. Because he talked about bringing the U.S.–Russia relationship back to normal.

So the Trump camp removed Putin’s explicit admission that he wanted Trump to win the election, and that he took measures to achieve that end. Gee, why do you suppose Trump didn’t want the American people to know about that, even after they saw it with their own eyes when it occurred? Could Trump be trying to re-write history in order to cover up his collusion with Russia? Would he be that obviously Orwellian? Well, on Tuesday he spoke at a VFW event and said “What you’re seeing and what you’re reading is not what’s happening” That’s frighteningly close to what Orwell wrote in 1984: “The party told you to reject the evidence of your eyes and ears. It was their final, most essential command.”

To make matters worse, the official video of this on the White House website has the same clearly intentional and flagrantly deceptive edits. This is nothing more than the sort of twisted propaganda tactics that occur regularly in authoritarian dictatorships. In fact, Russia excised the same parts of the transcript as the White House did (collusion?). Trump is trying to erase the fact that Putin openly advocated for his candidacy, and even directed his officials to provide assistance. And what’s really disturbing is that it seems to be right in line with the sort of abhorrent behavior we all expect from Donald Trump.

See for yourself: And be prepared to be disgusted by the unscrupulous immorality of our current, and hopefully short-tenured, president.

UPDATE: Philip Bump of the Washington Post is saying that Maddow’s analysis of these video discrepancies is wrong. He says the video that the White House (and the Post) transcribed was missing the part of the question identified above. But even if that’s true, why didn’t the White House get the complete video? Maddow did. And if they want to say this is all just an innocent mistake, then why haven’t they corrected the White House website? Are we supposed to believe that they are committed to the truth when they leave information they know is false on their website?

UPDATE II: Sometime on July 26, the White House website finally corrected their transcript of the the Trump/Putin press conference. And it only took them them a week and a half.