The deliberate deceit and hostility of Fox News is escalating as Donald Trump gets closer to being tossed into the dustbin of history. With special counsel Robert Mueller progressing toward the inevitable report of Trump’s criminality, and former insiders like Michael Cohen preparing to truth bomb the President, the weasels at Fox News are just getting more desperate in the most obvious and embarrassing ways.

On Saturday’s episode of the Greg Gutfeld show, the eponymous host (who thinks he’s a comedian) introduced the program with the “shocking” results of an NBC/Wall Street Journal poll. [Note: Fox and Friends misused the same poll] Among other things it revealed that a majority of respondents (56% to 33%) said that Democrats are “out of step with most Americans’ thinking” That’s a pretty lousy number that indicates some trouble for the party. Although it doesn’t reflect the manner in which Democrats are disconnecting. While Fox News and the GOP want you to think it’s a condemnation of the Party’s embrace of lefties like Alexandria Ocasio-Cortez, it could be just as easily that they think the Party isn’t embracing them tightly enough.

But what really makes this Fox News segment ludicrous is that they left out another significant result from the poll. Republicans were also deemed to be out of touch, and by a slightly larger margin (57% to 33%). For some reason that statistic was never mentioned on Fox News. Go figure. 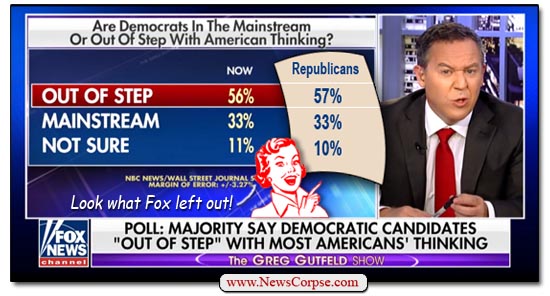 In addition to this dissemination of blatantly distorted news, Fox also failed to mention everything else in the poll that revealed how badly the Trump administration is at odds with the American people. For instance:

Since Fox News went to the trouble of citing this poll, they ought to have reported the results more completely. And particularly with regard to the question of how badly Americans think the Republican Party is out of touch. But then again, Fox has never been known to responsibly cover the news, so why should they start now?

With the midterm elections coming up you can count on Fox to lie profusely about the issues and to smother Trump with accolades. Trump has promised to campaign on behalf of GOP candidates “six to seven days a week when we’re sixty days out.” So he’s effectively abdicating his presidency. And Fox News will devotedly air every single one of Trump’s boring, mindlessly repetitive rally speeches in their entirety. Which is certain to increase the incidence of cognitive infirmity among his glassy-eyed Deplorables.

3 thoughts on “Fox News Reports Poll Showing Democrats are ‘Out of Step’, But Guess What They Left Out”