The crusade by Donald Trump and his administration to malign and endanger journalists continues in full force Thursday morning with what might otherwise have been a routine daily press briefing. What needs to be noted first, however, is that the White House press briefings are never really routine anymore, and they certainly are not daily. They held five briefings during the month of June, and only three in July. 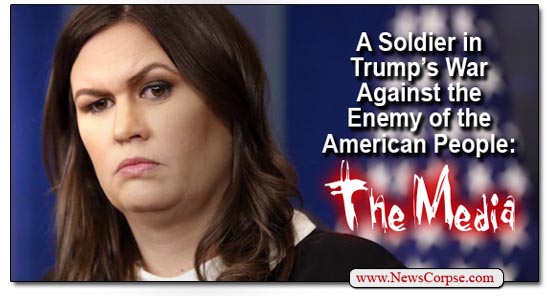 During Thursday briefing, CNN’s Jim Acosta had to interrupt in order to be recognized because Trump’s censorious communications office has virtually blacklisted him. But he managed to get a question out that has particular significance to the media. Earlier in the day press secretary Sarah Huckabee Sanders was interviewed by NPR. She was told about Ivanka Trump’s statement, in direct disagreement with her father, that she did not think that the media is “the enemy of the American people.” Sanders was asked to state her own position on the matter, but she conspicuously dodged the question with whining about how she and Trump were subject to criticism, poor things. So Acosta gave her another chance to provide a clear answer (video below):

Acosta: “I think that it would be a good thing if you were to say right here at this briefing that the press, the people that are gathered in this room right now doing their jobs every day, asking questions of officials like the ones you brought forward earlier, are not the enemy of the people. I think we deserve that.”
Sanders: I think that the President has made his position known. I also think it’s ironic … that not only you and the media attack the President for his rhetoric when they frequently lower the level of conversation in this country. Repeatedly the media resorts to personal attacks without any content other than to incite anger. The media has attacked me personally on a number of occasions.

So it’s the media that is lowering the level of conversation, not Trump’s infantile insults and boorish hostility? Sanders was merely repeating her dodge with the same laments about how she has been the victim all along. She then rattled off a series of examples of the media being mean. The problem is that none of them were examples of media behavior. She said that ICE officials were not welcome at their churches; that a comedian (Michelle Wolf) made some jokes about her; that she required Secret Service protection. The media didn’t do any of that. But regardless, she blamed the media for those inconveniences and slithered out of answering the question. So Acosta followed up:

Acosta: Sarah, if I may follow up. You did not say in the course of those remarks that you just made that the press is not the enemy of the people. Are we to take it, from what you just said – we all get put through the ringer, we all get put through the meat grinder in this town, and you’re no exception, and I’m sorry that happened to you. I wish that that had not happened. But for the sake of this room, the people who are in this room, this democracy, this country, all the people around the world are watching what you’re saying, Sarah. And the White House of the United States of America, the president of the United States should not refer to us as the enemy of the people. His own daughter acknowledges that and all I’m asking you to do, Sarah is to acknowledge that right now and right here.
Sanders: I appreciate your passion. I share it. I addressed this question. I addressed my personal feelings. I’m here to speak on behalf of the President. He’s made his comments clear.

So there you have it. She brushed off the question again, leaving the world to conclude that she repudiates Ivanka’s statement and remains aligned with Daddy’s Stalinist opposition to the First Amendment of the Constitution. What’s more, she asserts that the prior statements against the press by Trump and company were “clear” and still his policy toward journalists who are just doing their jobs. And it will remain his position until some reporter gets killed by a StormTrumper who thinks he’s carrying out the orders of Dear Leader to eliminate the enemy.

So he still thinks a “large percentage” of the media is the enemy. And that includes any media that doesn’t suck up to him (i.e. Fox News). So what’s the difference?

2 thoughts on “Hey Ivanka: Trump’s Press Sec Sarah Sanders Refused to Deny that the Press is the Enemy of the People”