In Washington, D.C. today, Sen. John McCain is being remembered by his family and his many friends and colleagues. Meanwhile, Donald Trump is at his golf resort (again) tweeting manically about the failures of his own Justice Department. He’s posting ludicrously ill-reasoned quotes by the tiresome swarm of sycophants he’s watching on recorded programs from State TV (aka Fox News). Obviously he can’t watch live television for fear of being subjected to the outpouring of goodwill toward McCain, or anyone other than himself. 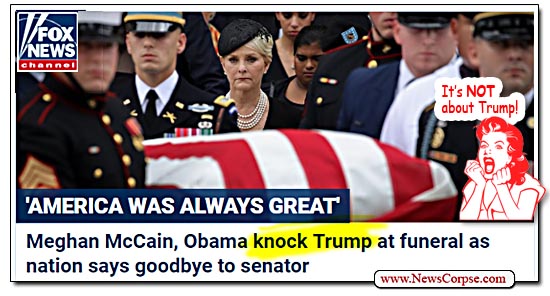 Even Fox News is covering McCain’s funeral on the air, which leaves nothing else for Trump to watch but cartoons or those “sons of bitches” playing football. But on Fox’s website it’s a different story. The lead news item on their homepage is one that features the headline “Meghan McCain, Obama knock Trump at funeral as nation says goodbye to senator.” Above that is a photo that is captioned “America Was Always Great,” a line taken from the eulogy by Meghan McCain.

Notice that Fox’s headline frames the story as a “knock” on Trump, rather than a report about the McCain funeral. That tells you what they think was the most important part. The article then characterizes McCain’s comment as a “swipe” at Trump, which may be true. But it’s also an expression of patriotism and an enduring reverence for the country, which makes Fox’s complaint sound trite and disloyal. It’s an awkward position for Fox to take under the circumstances. But they didn’t limit their disapproval to just that remark:

“It was Meghan McCain who had the most searing swipes at the president however. Notably she said that her father’s passing represented the passing of ‘American greatness. The real thing, not cheap rhetoric from men who will never come near the sacrifice he gave so willingly, nor the opportunistic appropriation of those who lived lives of comfort and privilege while he suffered and served.'”

It’s doubtful that Trump’s minders allowed him to hear any of that harsh articulation of the truth. It would have sent him into (even more) hysterics. Nor could his babysitters permit Trump to hear what President Obama said in his eulogy, that Fox also assumed was directed at Trump:

“Obama’s jabs were more subtle but still appeared to be directed at the current occupant of the White House. He derided those in politics who traffic in ‘bombast and insult and phony controversies and manufactured outrage.’ He also attacked ‘a politics that pretends to be brave and tough but in fact is born of fear.'”

These fragments of the addresses by both McCain and Obama were singled out by Fox News to create the impression that the whole affair was a just a political sideshow aimed at denigrating Trump. But in both speeches they were merely brief interludes in much longer heartfelt tributes to someone they loved and admired. The article didn’t bother to quote any other parts of these touching eulogies. Apparently Fox was determined to trivialize the funeral service, belittle the mourners, and not allow the day to pass respectfully.

And that’s why Trump loves Fox News so much. They are just as devoted to exalting him above everything and everyone else as he is. Fox is a cable television appendage to Trump’s massive and unrestrained ego.