The professional Trump-fluffers at State TV (aka Fox News) are very concerned about what is happening to innocent children. No, not the ones that Donald Trump has ripped from the arms of their immigrant parents and put in cages along the border. Fox News is worried about American children who are being indoctrinated into socialism by nefarious congressional candidates. 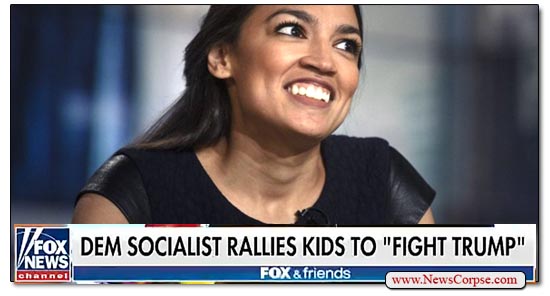 On Sunday’s episode of Fox and Friends, the “Curvy Couch” potatoes latched onto a video that was posted by Alexandria Ocasio-Cortez who is running for the 14th district seat in New York. Ocasio-Cortez is seen talking to a group of kids in a park about what she’s doing. The kids are clearly interested and, when she mentions that she’s going to Congress to fight Trump, they spontaneously erupt in cheers. Several of the kids are heard volunteering that they don’t like Trump.

However, children engaged in civic affairs is viewed as a dangerous trend by the Fox News crew. Co-host Ed Henry refers to Ocasio-Cortez as a “cause celebre” on the left, and then introduces the video where he falsely says that she is “trying to rally kids to go after President Trump.”

“We need your help to fight Trump” –Alexandria Ocasio-Cortez enlists children to help rally against the president pic.twitter.com/xMxG5GmKfS

In the video, the sin that Fox News is so rattled about is that Ocasio-Cortez asks a group of kids if they will go home and tell their parents to vote. Oh my heavens, no. What has become of the world? A candidate for Congress isn’t ignoring an exuberant group of young folks who clearly have an interest in what she’s saying. She isn’t dismissing them as waifs and then catering to the elders who can vote and donate to her campaign. She’s actually engaging them in a respectful conversation and encouraging their interest in civic affairs (see her video below). So naturally Fox News thinks this is abhorrent and must stop immediately. The Foxies continue their brazenly partisan harangue in this fear mongering exchange:

Rachel Campos-Duffy: I actually love this video because there’s so much about Alexandria that is so revealing. She’s such a novice that she really tells you the truth about socialism. This is what socialists do for kids. They don’t help kids. They organize kids. They indoctrinate kids. That’s what she’s doing. That’s what social justice warriors like her are best at.
Pete Hegseth: That’s a good point, you’re right. She’s naive. She’s talking to these kids. Go tell your parents how much you hate Trump.

So Campos-Duffy is glad that Ocasio-Cortez is a political novice because it results in her telling the truth. Unlike the propagandists on Fox News who are seasoned professionals with the experience to suppress any honest tendencies and stick to lying at all times. And Hegseth agrees that encouraging kids to engage in discourse with their parents is somehow subversive and anti-American. They are both apparently afraid that the adults in these families will be unfairly coerced into voting against Trump by their brainwashed offspring. It makes one wonder how susceptible the Fox News hosts are to what their manipulative kids are telling them to do.

Needless to say, including children in discussions about politics is a positive and educational exercise. It prepares them for when they will be old enough to participate in the civic duty of voting. But on Fox News it’s a frightening notion that evokes scary images of informed young citizens. Never mind that the notorious hypocrites at Fox regularly feature conservative kids, and even bring them on their network for extended interviews. For instance, Jesse Watters interviewed nine year old Trump fan Jacob Silva for nearly seven minutes. But they better be careful. Fox also hyped a thirteen year old conservative, Jonathan Krohn, who had the good sense to grow up and, by the time he was seventeen, was supporting Barack Obama.

Out here in Corona, Queens with @JumaaneWilliams organizing the kids ??? pic.twitter.com/urFuwFXQ3W