If you’re looking for more evidence of the civil libertarian bona fides of Donald Trump and his inner circle, you’re going to be looking for a long time. The brazen affinity that Trump has for totalitarian rule, however, just keeps being reaffirmed by his tweets and his sycophants. On Friday Trump-fluffer Sean Hannity proposed a prohibition on citizens access to their representatives in Congress. And today the devolution of American democracy continues courtesy of Trump’s attorney, Rudy Giuliani. 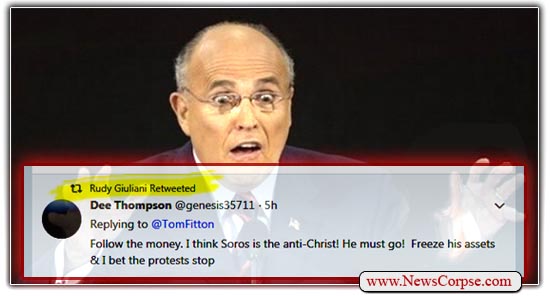 The saga of Giuliani’s gaffe prone advocacy of his presidential client is filled to the brim with embarrassing episodes that frequently incriminate Trump. Giuliani is the one who said on national television that Trump paid hush money to Stormy Daniels while Trump was denying it. And he once implied that the reason Trump can’t interview with special prosecutor Robert Mueller is that he’s either a liar or a mental defective. With friends like Rudy, who needs enemas?

Which brings us to Saturday morning’s Twitter romp with Rudy. In an attempt to shore up the hostility of the Trump Brigades, Giuliani retweeted the comments of a random Twidiot who had a perverse notion of how to combat anyone who protests against Dear Leader Trump: “Follow the money. I think Soros is the anti-Christ! He must go! Freeze his assets & I bet the protests stop.”

Let this sink in. Giuliani, a lawyer and former U.S. Attorney, thinks it’s acceptable to seize the assets of a private citizen who has done nothing illegal. He thinks that someone who donates money to legitimate non-profits and educational/activist organizations can have his funds confiscated only because they were given to groups that Giuliani opposes. So this is the President’s personal attorney who is advocating the sort of oppressive behavior of outright tyrants.

What’s more, Giuliani is promoting the lie that Soros is funding citizens engaging lawful protests. There is zero evidence of that, and it wouldn’t be illegal if he were. If Giuliani wants to support legislation to prohibit such funding, he would find significant support from progressives who are troubled by the financial gifts of the Koch brothers to right-wing people and issues. But that isn’t Giuliani’s goal. He wants to silence only the progressive voices in America.

Giuliani is not alone in attacking Soros. He has long been a regarded by the right as the supervillain behind everything that is wrong with America. Never mind that he is the model of the capitalist dream, a man who rose up from a childhood under Nazi occupation, to become one of America’s wealthiest citizens. That’s why he was recently attacked by Sen. Chuck Grassley, who charged him with backing Brett Kavanaugh’s protesters; and by Rep. Louie Gohmert who gave out a “Heil Soros” on Fox News; and by Trump himself in tweet that lashed out at him with no support for his claims.

And let’s not forget the part about the “Anti-Christ.” Of all the comments that Giulian might find to retweet, he picks one that calls a Holocaust survivor a name that’s akin to “Christ killer” and foreshadows the end of civilization. It’s a full blown dog whistle, nay fog horn, of the anti-Semitism and bigotry that is rampant throughout the Cult of Trump. And Trump’s glassy-eyed disciples will will eat it up like they do all the other racist tropes that spew from Trump and his shills.