The blatant biases of State TV (aka Fox News) have been well documented for many years. And particularly in the Era of Trump, their slobbering sycophancy has gone to extremes never before seen. But for most of that time they have confined their propaganda to slavishly supporting Donald Trump and falsely maligning his critics. Now they are upping their game. 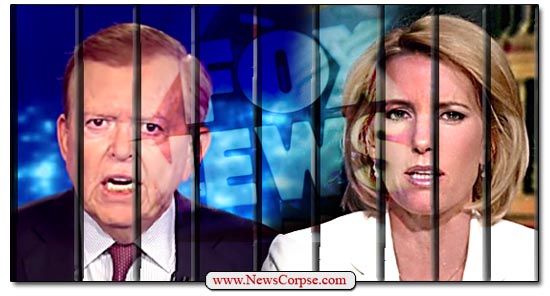 Throughout much of Trump’s presidency he has attempted to govern as if he had dictatorial powers. He has sidestepped Congress to issue more executive orders than any of his modern predecessors. He has interfered with ordinarily independent government agencies to impose his will. And he has implemented numerous policies that have been struck down by the courts as unconstitutional. And in all of these matters he insists that he has the ultimate power over whether his initiatives are carried out.

Now Trump is getting help from Fox News in his bid to become the American Fuhrer. A pair of court decisions has inflamed the network’s hosts to the point that they are openly advocating lawlessness on the part of the White House.

On Monday night, the embarrassingly brown-nosing Fox Business host, Lou Dobbs, presided over a discussion about the court decision forcing Trump to restore the press pass of CNN’s Jim Acosta. The White House’s original suspension of the pass was repudiated by most of the press corps, including the executives at Fox News (although not their on-air punditry). Following the court order, Trump issued a bizarre and unconstitutional decree that sought to enforce strict behavioral guidelines for reporters. But Dobbs and his guest Gregg Jarrett weren’t having any of it (video below):

Dobbs: Isn’t there a time where you have to just tell a district court judge to go to hell? I mean the idea that you have to follow the dicta of a district court judge and can’t make rules and can’t run the White House in the way that it has been run since time immemoriam.
Jarrett: There’s no freedom to be obnoxious and rude. There’s no freedom of the press to question the President. It’s a privilege to be there at the White House. And there are rules and norms that have always been followed. And now you’ve got a judge who has decided to expand due process beyond any resemblance of its intent.
Dobbs: He’s telling the President if the United States how to conduct business.
Jarrett: I agree with you. I would tell the judge to go to hell.

So these alleged “patriots” believe that “There’s no freedom of the press to question the President”? Apparently their constitutional education didn’t even make to the First Amendment. What’s more, they believe that they can simply tell judges to “go to hell”? That’s a form of ultra-rightist anarchy that is practiced in dictatorships, not constitutional republics. And now it’s openly advocated by Fox News, Trump’s designated media mouthpiece.

But that isn’t the end of it. Fox News host Laura Ingraham took a similar stand on different subject. Another recent court ruling found that Trump’s proposed restrictions on how and where immigrants can apply for asylum were unconstitutional. This pertains to the refugees that Trump falsely accused of being criminals and sent the military down to the border to prevent an imaginary “invasion.” In response to this ruling Ingraham lashed out saying that:

“These courts are out of control. […] Maybe it’s time to just defy these court orders and say, ‘Make me. Make me. We think your order is illegitimate.”

Once again, a Fox Newser is advising the President to violate the law, to act in contempt of court, and to impose his dictatorial will over the rule of law and the American people. This is beyond mere political advocacy. This is subjorning criminal acts. This is cheerleading for tyranny. This is profoundly disrespecting the principles enshrined in our nation’s Constitution.

And, not to be overlooked, this is being done with the full knowledge and approval of the network’s executives and owners. Fox News is acting in concert with the criminals in the White House and their accomplices in the Republican Nationalist Party.

This is a shockingly inappropriate abuse of the air waves and warrants an investigation by the FCC and the oversight committees in Congress. Just like yelling “Fire!” in a crowded theater is not protected free speech, compelling illegal acts on TV is not protected freedom of the press. If Sean Hannity were to look into the camera and tell his viewers to get their guns start shooting some Democrats he would be arrested immediately. This is the same thing. It’s a direct incitement to criminal activity. And Fox News needs to be held accountable.

Lou Dobbs is unhappy that the White House restored Acosta's press pass, and asks "Isn't there a time where you have to just tell a district court judge to go to hell?" pic.twitter.com/SoAJcfFhwW