On Friday evening an ultra-conservative judge in Texas handed down an obtusely argued ruling that the Affordable Care Act is unconstitutional. His reasoning hinged on the fact that Republicans in Congress, who have long aspired to kill the popular legislation, amended the law in a manner that rendered it invalid. This was a well orchestrated plot to kill a program that has helped millions of Americans and saved lives. 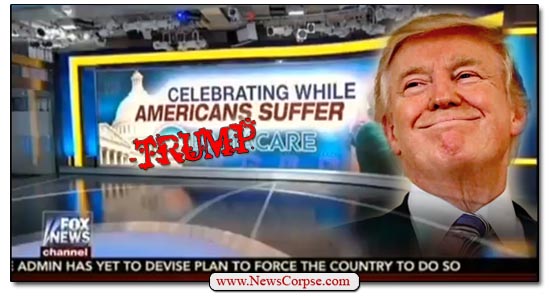 So what was the reaction on Fox News? Well, it began with an early morning episode of Fox and Friends (video below) that should put to rest forever any doubt that these cretins are sadistic, uncaring, and filled with hatred for their fellow citizens. The program that Donald Trump watches religiously began with this exchange by co-hosts Ed Henry, Pete Hegseth, and Jedediah Bila:

Henry: Today, a little gift ahead of Christmas.
Hegseth: I already got a gift today. I got a gift last night.
Henry: It’s the gift that keeps on giving.
Hegseth: Well, I don’t know what your gift was but …
Henry: I know what you meant. Obamacare is unconstitutional. That is what a federal judge is ruling in Texas. He said the Affordable Care Act is invalid as open enrollment closes today. What’s fascinating about it this is that the judge is saying that the whole law, the entire Affordable Care Act should in fact be torn down because the individual mandate demanding that you buy health insurance is unconstitutional.
Bila: It’s about time. I mean we’ve been having this debate for a long time. I was so happy to see this. This was completely unconstitutional from the start.

This is their idea of a Christmas “gift” that “keeps on giving”? This is something that they are “so happy to see”? Do they realize that millions of Americans depend on this program for critical healthcare? That means medical services and pharmaceuticals for people with potentially lethal illnesses. It means care for sick children and pregnant women. If ObamaCare is struck down then everyone with a preexisting condition will once again be shut out of the insurance market. It means that young people on their parents’ insurance plans will lose their coverage. It means the return of discriminatory pricing and the elimination of preventative care. And even for those who don’t have serious medical problems, it means much higher premiums.

Republicans have chanted “repeal and replace” for eight years, but in all that time have failed to offer their “replacement” for ObamaCare. Now the ACA could be lost with nothing to protect those who rely on it. And this makes the Foxies shiver with glee. Of course, it wasn’t just the “Curvy Couch” potatoes of Fox News who threw a party for this ruling. Donald Trump tweeted his own holiday joy at seeing millions of people thrown into healthcare nightmare, calling it “Great news for America.”

Watching these grotesquely inhumane gasbags laugh about this ruling as a gift for Christmas is painful in itself. It almost makes one wish that they would have to go through this hardship themselves, or with a loved one. They have no concept whatsoever of empathy or concern for other Americans. But if there is any silver lining to this, it’s that there will be stronger demand for Medicare-For-All than ever before, and for the Democrats who support it.

5 thoughts on “An Ugly Celebration: Fox News Cheers the ObamaCare Ruling that Will Cause Millions to Suffer”