Throughout his public life – and especially while president – Donald Trump has demonstrated what an awful poker player he would be. He has what pros call a “a tell” that gives away what cards he’s holding. And for the most part, Trump is holding a hand that is panic full of fear. He displays that on a nearly daily (hourly?) basis with his insipid “Witch Hunt” tweets and his frantic attacks on special counsel Robert Mueller. 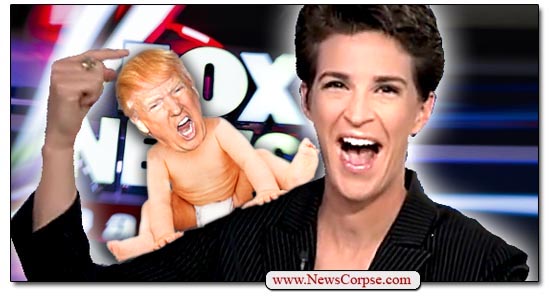 Of course, Trump is also squarely focused on the media that he refers to in Stalinist terms as “the enemy of the people.” His frightened reaction to every new disclosure of wrongdoing by him or his crime family is obvious to anyone paying the least bit of attention. And the more he attacks CNN or the New York Times or whatever reporter happens to ask him the probing question of the day, the more he reveals what’s scaring him the most at that moment.

So what’s clearly scaring Trump now is MSNBC’s Rachel Maddow. Trump’s “Make America Great Again” reelection committee just posted an ad Facebook that asks his dimwitted cult followers to take a survey, and Rachel Maddow is featured in the ad’s graphic, although not in the video to which it links. She’s the bait for this campaign that implores his fans to “Take the Survey.”

The alleged “survey,” however, is an old marketing trick aimed at getting respondents to sign up and divulge personal information, including their email addresses. These are later used to beg for donations and organize political events. The results of the fake survey are never published, and if they were they wouldn’t have any real value due to the smarmy tactics used to lure respondents. Like everything else Trump does, it is hardly scientific.

So what’s the news that has triggered Trump’s assault on Maddow, someone he rarely even mentions? Right now Maddow is perhaps the most insightful and effective commentator on Trump’s exploding legal problems. She is dissecting them in a coherent and relatable manner. But is that enough to set him off. After all, he has never tweeted about her since becoming president. Although he did retweet his son Eric once, nearly a year ago. And that retweet contains a clue:

Trump is very concerned about his friend, and “shadow” chief of staff, Sean Hannity. Lately Maddow has been beating the pants off of Hannity. She has dominated him in the ratings ever since the election last month. So far in December she has beaten him every single day in both total viewers and the all-important advertising demo of 25-54 year olds. So it looks like Trump is rushing in to rescue the floundering Hannity. Or maybe someone at Fox News reached out for this aid.

Let’s not forget that the former president of Fox News, Bill Shine (who was fired for mishandling the sexual misconduct of Fox CEO Roger Ailes and host Bill O’Reilly) is now Trump’s Deputy Chief of Staff for Communications. Or that Shine was Hannity’s producer before being bumped up to the executive suites. So it isn’t particularly surprising that Maddow would suddenly appear as the face of the “Mainstream Media … out to bring down [his] Administration.” In reality, he’s doing that pretty much on his own. Maddow is merely providing a factual chronicle of the criminal path that Trump chose for himself. But consistent with his warped character flaws, he’s determined to blame it on someone – anyone – else.