The saddest story of the year has got to be the tear-jerking saga of a lonely president who is desperate and frightened about the monsters under his bed. Donald Trump is once again rage-tweeting on a Saturday morning because he has nothing better to do – no presidential stuff, no holidays with a loving family. It’s enough to make you wanna take him in your arms and throw him into a jail cell where he can weep in the warm embrace of the other members of his crime family. 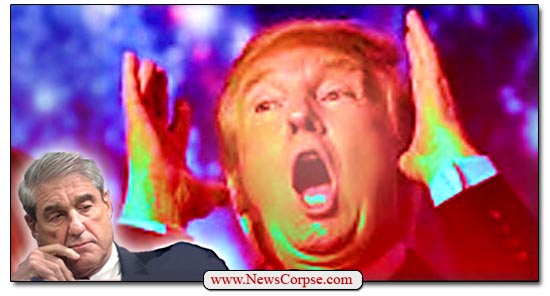 Trump began his pre-New Year’s weekend digging back in time to when he whined plaintively about a report (that he undoubtedly saw on Fox News) that some texts between a couple of FBI agents were allegedly deleted:

The Mueller Angry Democrats recently deleted approximately 19,000 Text messages between FBI Agent Lisa Page and her lover, Agent Peter S. These Texts were asked for and INVALUABLE to the truth of the Witch Hunt Hoax. This is a total Obstruction of Justice. All Texts Demanded!

Trump’s assertions that the messages were deleted and lost is totally and provably false. Not that the most lyingest president in history cares. The agency recovered and preserved all the messages after a temporary tech glitch. That, however, didn’t stop Trump from demanding all of the texts that the FBI already has, and insisting that there has been “Total Obstruction of Justice” – which is something he’s very familiar with. This triggered his knee-jerk outcry of “Witch Hunt” and led to more inanity in another tweet:

I am in the White House waiting for the Democrats to come on over and make a deal on Border Security. From what I hear, they are spending so much time on Presidential Harassment that they have little time left for things like stopping crime and our military!

So Trump is saying that he’s in the White House waiting for Democrats who have already left town. That’s so sad it hurts. Picture him staring out of the window wondering if Chuck and Nancy have forsaken him on Christmas. He misses the “Presidential Harassment” that he soaks up because at least it’s some attention. By the way, the Democrats only left town because the Republicans (who still control both houses of Congress for a few more days) ended the session. Democrats had no say about that.

It’s also curious that Trump complained that Democrats “have little time left for things like stopping crime and our military!“ Did Trump really mean to say that he supports stopping our military? That would be consistent with his recent decision to abruptly retreat from Syria, leaving ISIS free to regroup and our allies to be slaughtered by Russia and Turkey. And Trump’s position on the shutdown is so incoherent that even Fox News has had to shore it up with extra-thick propaganda. That’s when Trump isn’t using it to evade justice and impeachment.

Next up is Trump’s pathetic and obvious attempt to change the subject away from those that are making him look so foolish and frightened:

Just had a long and very good call with President Xi of China. Deal is moving along very well. If made, it will be very comprehensive, covering all subjects, areas and points of dispute. Big progress being made!

Anyone who believes that Trump actually had a phone conversation with President Xi just now is terminally naive. First of all, at the time of the tweet it was midnight in China. Not only is that awfully late for a diplomatic phone summit, but it would be cutting into Trump’s morning appointment with whatever is on Fox News. And without that daily injection of hate mongering and fake news, Trump couldn’t get out of bed and face the ever-worsening fates that are crushing his spirit and producing these deranged tweetstorms.

And finally (as if there is ever a final tweet from this wacko-bird), Trump makes one the most ludicrous, blame shifting comments of his wretched presidency:

Any deaths of children or others at the Border are strictly the fault of the Democrats and their pathetic immigration policies that allow people to make the long trek thinking they can enter our country illegally. They can’t. If we had a Wall, they wouldn’t even try! The two…..

This is so absurdly far-fetched that it hardly needs a response. Other than to say that it is despicable that Trump would exploit these tragic deaths for such a brazenly partisan political purpose. But then again, that’s Trump. And his reasoning is ridiculous. People who are fleeing poverty and violence aren’t going to remain someplace where their lives are at risk because they might have to climb a ladder to get over a wall. Is he really that callous and stupid? (You don’t have to answer that).

4 thoughts on “Poor Donald Trump is Alone in the Big, Scary White House Tweeting About the ‘Witch Hunt Hoax’”