At this point in the Era of Trump, it isn’t exactly breaking news when Donald Trump tells another lie. It’s really just the natural state of his psychosis to casually pervert the truth in all things great and small. He does it daily on his Twitter feed as well as his hostile encounters with the press. And in most cases the obvious falsehoods are easily spotted and debunked. 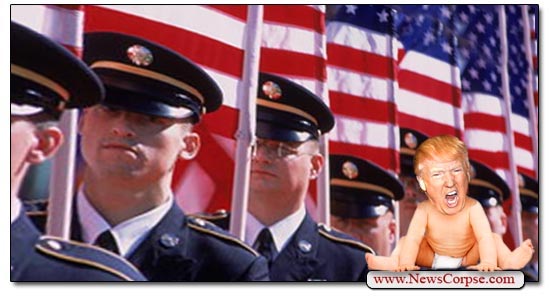 However, every now and then Trump engages in a fit of dishonesty that is so outrageous it’s hard to fathom what’s going through his diseased mind – or if anything is going through it at all. And one of those fits occurred during his regularly scheduled Sunday morning tweetstorm. While languishing forlornly in the White House this holiday season, Trump found some rare solace in an Associated Press poll. So he blurted out on his Twitter machine that:

Veterans on President Trump’s handling of Border Security – 62% Approval Rating. On being a strong leader – 59%. AP Poll. Thank you!

It’s generally understood that the military is more conservative than the population at large. Although some high profile leaders have been notably disgusted by Trump, including his ex-chief of staff Gen. John Kelly, who called Trump an idiot, and his ex-defense secretary Gen. James Mattis, whose letter of resignation made it clear that Trump is reckless and ignorant. Trump appointed both of these senior officers with glowing accolades, but eventually fired with them unseemly disrespect for their service.

But the problem with Trump’s citation of this poll is that he’s read it horribly wrong. The sixty-two percent figure that Trump cited is just related to border security, not his approval by veterans in this poll. That number is fifty-six percent. The number Trump quoted is, more interestingly, also his job approval by just white veterans. That’s a disturbing coincidence for someone who is so often associated with racists and racism. In all likelihood, this was deliberate on Trump’s part to imply that a larger level of support than he really has. After all, the opinions of his white followers are the only ones that mean anything to him. For the record, the poll shows that only twenty-two percent of African-Americans in the military approve of Trump. And of course, Trump got and twisted this info from his favorite Fox News program, Fox and Friends.

It’s also noteworthy that this poll questioned 115,000 people, of which only 4,000 were veterans. So the numbers reflecting that segment are tiny compared with the overall pool of respondents. And on that matter, Trump didn’t bother to mention the other results in this poll. For instance, overall, 56 percent of Americans disapprove of the job Trump is doing as president. And women, the fastest growing demographic group in the military, disapprove of Trump by fifty-eight percent. Only forty-eight percent of vets say that Trump “has the right temperament to serve as president.” Fifty-eight percent of all respondents say he has “tried to impede the Russia investigation.”

So as usual, Trump has flagrantly misrepresented reality in order to prop himself up. He has to distort the truth because otherwise there is little he can say that isn’t dreadfully negative about him. But this episode is worse than usual because Trump takes a number that is obviously a specific segment of the veterans community and he tries to pass it off as broader, across the board support. That’s the behavior of a sick and desperate loser who has nothing left but a fantasy world wherein he is universally adored.