It’s official. The President of the United States of America is a whiny little baby who can’t be left on his own without throwing an infantile tantrum. Actually, Donald Trump will do that with other people around also. But it’s especially noticeable when he is whimpering about his loneliness himself and in public, as he did at his first cabinet meeting of the new year. 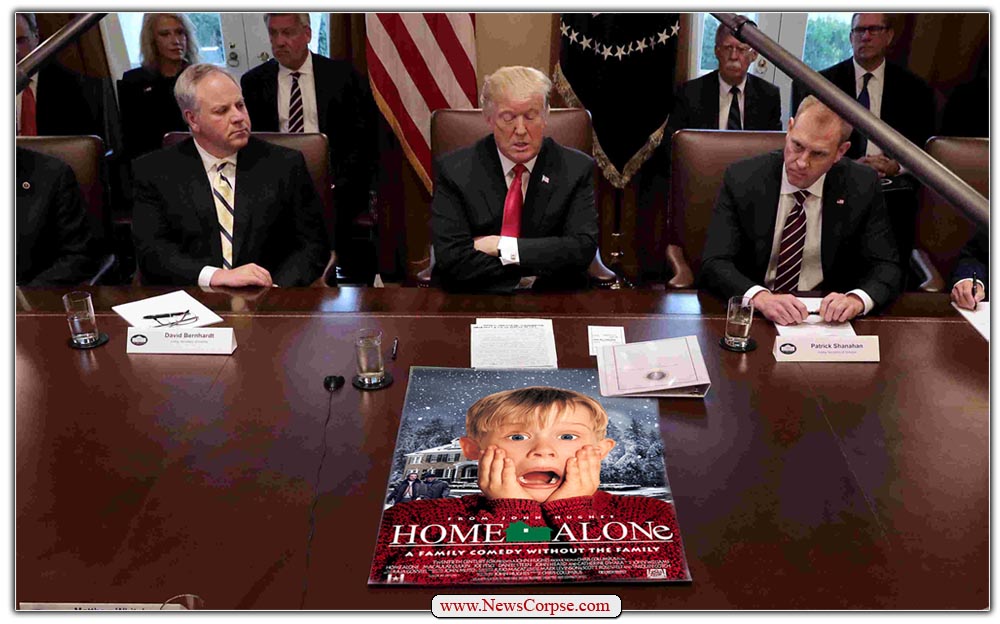 The White House get-together with his sycophantic assembly of bootlickers was an epic mess. Trump lied repeatedly about many subjects. He misrepresented the history of the Russia’s invasion of Afghanistan. He said that he fired his former Secretary of Defense, Jim Mattis (Mattis quit in protest). After insulting generals who have criticized him, he claimed he would have been a good general. Never mind that Cadet Bonespurs evaded the draft five times. And he went on endlessly about his idiotic vanity wall.

Among the bizarre episodes in this meeting, Trump, sitting behind a “Wall of Thrones” style poster on the table, complained about having been left home alone during the holidays. Although he didn’t go down to his golf resort in Palm Beach, he didn’t explain why Melania or other members of his family couldn’t have been with him at the White House, instead of partying at Mar-a-Lago. “I was here on Christmas evening,” Trump cried. “I was all by myself in the White House. It’s a big, big house.” But that wasn’t the only time that Trump expressed this sense of being forsaken. It began several days before:

I am all alone (poor me) in the White House waiting for the Democrats to come back and make a deal on desperately needed Border Security. At some point the Democrats not wanting to make a deal will cost our Country more money than the Border Wall we are all talking about. Crazy!

Then he posted a video on Twitter where he sobbed that “While I’m at the White House working, You’re out there partying.” And he continued his snivelling in another tweet wherein he described himself as being “in the White House waiting for the Democrats to come on over.” This plaintive wailing was rather absurd since it was the Republicans, who controlled both houses of Congress at the time, that closed the session. Democrats had no say in the matter.

However, Trump’s relentless whining is just another indicator of how mentally unstable he is and how unfit to perform the duties of the presidency. Of course, he did proclaim with some pride that he is “The Most Fabulous Whiner.” And now he is providing even more proof of it – not that it was necessary.

One thought on “OMG! Trump Has Been Whining Incoherently About Being Home Alone for Two Weeks”