During the Trump Shutdown the President routinely made ludicrous comments about the necessity of building a wall on the southern border that most experts agree would be wasteful and ineffective. But even worse than that, Donald Trump would claim that his idiotic vanity wall would virtually eliminate, not just illegal immigration, but crimes like drug and human trafficking. Never mind that most of these activities take place at legal ports of entry where a wall would be irrelevant. 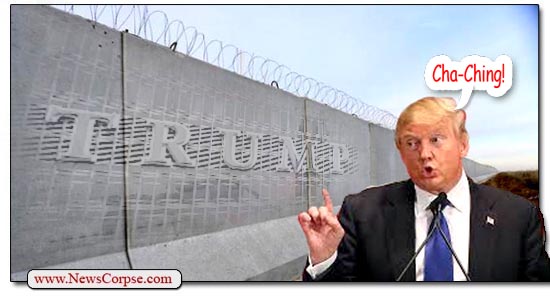 On Friday morning, however, Trump went further down the rabid hole to assert that the wall that has become a fetish for him was already being built (video below). “We’re building the wall,” he lied. “People don’t understand that. They’re starting to learn.” This, of course is totally false. There is no new wall being built anywhere. But Trump continued down that path of falsity:

“We’re spending a lot of the money that we have on hand, like in a business. But we have money on hand and we’re building, I would say we will have 115 miles, maybe a little bit more than that, very shortly. It’s being built. Some of it’s already been completed. In San Diego, if you look, it’s completed. It’s really beautiful, brand new. We have other wall that’s under construction and we’re giving out a lot of contracts. So we’re building the wall. It’s getting it built one way or the other.”

The problem with these remarks is that, if they were true, then Trump is actually confessing to a federal crime. There has been no money appropriated by Congress for the construction any new wall along the southern border. And since Congress is the only government body that can allocate such funds, any money spent on a wall would be misappropriation of funds. It would be just as much a violation of the law as it would be for Trump to build a statue of himself at Mar-a-Lago with government money.

Of course, this would be a difficult case to prosecute since Trump is confessing to something that, in reality, he hasn’t actually done. And you can’t convict someone of a crime that they didn’t commit, even if they say they did. He could confess to being Jack the Ripper, but since he wasn’t alive at the time, the London authorities would be unlikely to go after him.

In addition to Trump’s fishy confession, he is also admitting that his obsession with demanding funds from Congress for his wall is a scam. If he is already building hundreds of miles of the wall with “money on hand,” then why did shut down the government, making hundreds of thousands of Americans suffer? Notably, he has also claimed that the wall would be paid for by a new trade agreement with Mexico and Canada, or that it would pay for itself by reduced law enforcement costs. And don’t forget that Mexico was supposed to pay for it from the start. According to Trump the wall has been paid for at least four times over.

Trump’s fountain of nonsense is overflowing with crackpot assertions and dishonest blathering. Most of it never approaches the fringes of comprehensible commentary. He’s like the schizophrenic homeless guy under the freeway overpass who is yelling gibberish at passing cars.

Among his other flagrant lies in this interview are that El Paso “immediately” became one of the safest cities in the country after a wall was built there (it has been one of the safest cities long before any wall was erected); many Democrats want the wall but are being prohibited by Nancy Pelosi from saying so (because the iron hand of the Speaker is forcing unity among a caucus usually noted for being in disarray); and Trump’s foes take their legal complaints to the 9th Circuit Court of Appeals that has nothing to do with the case at hand (which, if true, would not be taken up by that court).

This is just the latest display of Trump diving off the plank into the deep end of idiocy. It fits nicely with his declaration of “no confidence“ in his own Intelligence team. Or his freak out over the release of a book (Team of Vipers) by his former communications aide. Or his boasting about a poll that actually showed him failing miserably. If there is one thing that we can be certain of, it’s that Donald Trump is not the “stable genius“ he thinks he is.