The questions about Donald Trump’s apparent psychological decline are rapidly becoming more than partisan speculation. And the person most responsible for affirming the President’s mental infirmity just happens to be Donald Trump. The more he talks about his own cerebral frailty, the more feeble he appears to be. 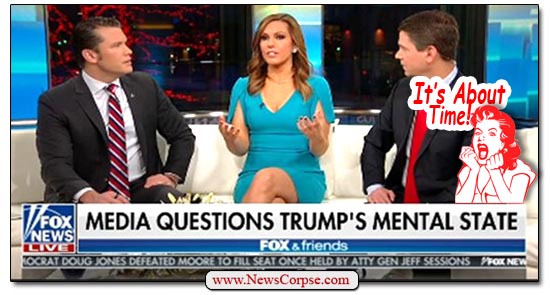 On Saturday morning Trump thought it was necessary to defend himself against the allegations that have been made by politicians, pundits, and mental health professionals. But his comments were a pathetic mess of ego and delusion. He tweeted that:

Now that Russian collusion, after one year of intense study, has proven to be a total hoax on the American public, the Democrats and their lapdogs, the Fake News Mainstream Media, are taking out the old Ronald Reagan playbook and screaming mental stability and intelligence…..

….Actually, throughout my life, my two greatest assets have been mental stability and being, like, really smart. Crooked Hillary Clinton also played these cards very hard and, as everyone knows, went down in flames. I went from VERY successful businessman, to top T.V. Star…..

….to President of the United States (on my first try). I think that would qualify as not smart, but genius….and a very stable genius at that!

It is notable that these tweets were posted less than ten minutes after a segment on this subject was aired on Fox and Friends. This is a pattern that is repeated frequently by Trump who obviously watches the program religiously, despite saying that he doesn’t have time for television. The message in the tweets is one that should be of concern to all Americans.

First of all, the investigation into his involvement in Russia’s interference in the 2016 presidential election has not been proven to be a hoax. Quite the contrary. There have already been four indictments with two guilty pleas. The rest of what has been uncovered by the special counsel, Robert Mueller, is still under wraps. And PolitiFact awarded Trump it’s Lie of the Year for repeatedly making this statement about the matter being a hoax.

Secondly, no one has ever recognized Trump’s two greatest assets as his “mental stability” or “being, like, really smart.” And if he wants to make that claim himself he probably shouldn’t sound so much like a “Valley Girl.” (fer sure). His true assets were actually having been born into a wealthy family and having the shameless lack of character that permits him to lie, cheat, and steal to get what he wants.

His boasts about education are a lame attempt to cling to some alleged glory from half a century ago. And it’s all the more irrelevant since he refuses to release his college transcripts. Also, Trump has never been a successful businessman. He would be far richer if he had just invested his inheritance in an S&P 500 indexed mutual fund. With at least four bankruptcies, he can hardly lay claim to any business prowess. And like his college claims, Trump refuses to release his tax returns to validate his alleged success in business.

Finally, Trump’s self-exalting assertions about his sanity and brilliance are downright surreal. When was the last time you heard “a very stable genius” say he was a very stable genius? Smart people are the last people to say that they are smart. Trump’s bragging is actually a sort of certification of his ignorance and instability. And he elaborated on that theme in brief remarks to reporters at Camp David when a reporter asked “This morning you were tweeting about your mental state. Why did you feel the need to tweet about that this morning?”

Whereupon Trump regurgitated his tedious refrain about having been an “excellent student” and becoming a successful businessman and TV star. Then he drifted off into a diatribe against Fire and Fury author, Michael Wolff, and his former top White House aide, Sloppy Steve Bannon. Watch this video and see for yourself if he ever approaches a coherent answer to the question regarding his mental state:

Remember, the question was “Why did you feel the need to tweet about [your mental state] this morning?” The answer was aimless blather about his perception of his own awesomeness and his perceived enemies. That isn’t the response of someone who is either stable or a genius. If anything, Trump’s response this morning affirms the broadly held assessment that he is unfit for the office he holds. His inability to maintain a focus on the topic is a symptom of cognitive dysfunction. It’s a cry for help that everyone – from his family to his Republican peers – is ignoring. And the peril this represents to the nation, and the world, cannot be overstated.