On a day when there is an abundance of newsworthy stories to report, Fox News went out of its way to deliberately spread false accusations aimed at Democratic members of Congress. While they could be reporting on the riots in Venezuela or the arrest of Trump pal Robert Kraft or the pending report from special counsel Robert Mueller or Roger Stone’s gag order, or the domestic terrorist that Trump won’t talk about, Fox News went a different way.

On their website, Fox News featured as their top story an article about some Democratic members of Congress who traveled to South Africa to attend the “Global Citizen: Mandela 100” festival honoring the historic activist and former South African president, Nelson Mandela. The festival was also a charitable event to raise funds and awareness of global poverty. But to Fox News it was a just a bunch of grifters on a holiday to catch Beyonce in concert. 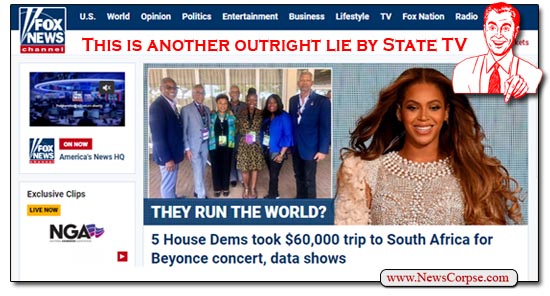 The headline on Fox’s story read: “5 House Democrats took $60,000 trip to South Africa for Beyoncé concert, records show.” The clear implication that Fox intended readers to take away from this was that congress members were wasting taxpayer money to enjoy themselves on a vacation with superstar celebrities. But even their own article refuted that characterization in the first few paragraphs:

“Five members of the Congressional Black Caucus took a $60,000 trip to see Beyoncé and other stars perform in concert in South Africa late last year, according to congressional disclosure records.

“The lawmakers were U.S. Reps. Gregory Meeks of New York, Barbara Lee of California, Bobby Rush of Illinois, Terri Sewell of Alabama and Hank Johnson of Georgia, according to the data.

“They attended the “Global Citizen Mandela 100” concert from Dec. 1-3 to celebrate the centenary birth of the late Nelson Mandela and raise awareness of global poverty.”

The article also noted that there were no taxpayer funds spent on this trip. It was “paid for by Global Citizen, a nonprofit that lobbies for anti-poverty programs around the world.” And Rep. Sewall told the press that the trip “was pre-approved by the House Ethics Committee.” She further described the festival as “a platform for world leaders to speak out against racial injustice and inequity, and voice their support for international assistance for underprivileged populations.”

So this attempt by Fox News to disparage representatives who were working to address the critical issues of racism and poverty was portrayed falsely by Fox as a self-serving joyride at taxpayers expense. Which shouldn’t surprise anyone. The mission of Fox News has always been to disseminate propaganda that maligns the good works of decent people, particularly if they are honorable efforts to improve the lives of the underprivileged.

Fox News continues to be the mouthpiece for the Republican Nationalist Party, the Greedy One Percent (GOP), and the Cult of Donald Trump. They are the standard bearers for the elitist class who aspire to keep people oppressed. And what better way to do that than to denigrate the people and projects devoted to making life better for all people. To that end, Fox News works hard to manufacture headlines like the one above to assure that their audience remains insensitive, uncaring, and above all ignorant.