The disease that infects the talking headcases at Fox News is apparently degenerative and causes its victims to decline ever further into the abyss of cognitive infirmity. This is especially true of the “Curvy Couch” potatoes on Fox and Friends, whose combined IQ has yet to break the grass ceiling. 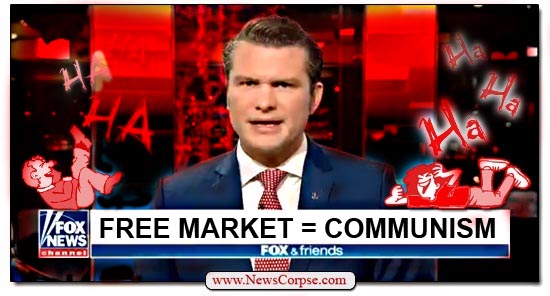 Donald Trump’s favorite morning show has a long history of hysterically offbase utterings. Their ratio of wrongness is in the stratosphere. Which is probably why Trump loves it so much. And a stinging example of this dumbassedness was aired on Sunday morning in a segment (video below) that was trying to make Rep. Alexandria Ocasio-Cortez look dumb. They failed miserably.

The segment was a response to the recent announcement by Ocasio-Cortez that she would be paying all of her congressional staffers a living wage of at least $52,000 per year. The thought of people being treated with respect, and compensated fairly for their work was just too much for the Fox Newsies, so they concocted an argument that they were certain would slay the newest Democratic monster at their gates. It went a little something like this:

Griff Jenkins: Get a load of this. A tweet went out yesterday. She said “Leadership begins at home,” whatever, or however she put it. She’s basically announcing that she is going to ‘redistribute’ the money appropriated to her congressional office to make sure that the entry level staffers get a fair share of money.

Heaven Forbid! Whatever will become of our country if the representatives we elect to serve our interests start actually behaving in accordance with our values? Notice how Jenkins worked in the term “redistribute,” in order to invoke the memory of some imagined socialist nightmare. Never mind that redistribution of wealth is common in free societies (even capitalist ones) where some measure of equity is sought through taxation and public assistance. In fact, the Trump Tax Scam was textbook redistribution, except it went from the working class to the wealthy.

Jenkins then went on to “Fox-plain” what was so terribly wrong with Ocasio-Cortez’s salary plan. He failed to observe that it was completely in line with the free market decision making of any employer. Instead, he complained that in order to pay entry level staffers a little more, she would have to pay her chief of staff a little less. Holy Crap! Anything but that. Our nation was built on the principle that the elitists at the top should receive all the benefits and the peons should be grateful for scraps. And this is when Jenkins’ co-host chimed in to agree:

Pete Hegseth: She said, “Everyone in my office will be paid a living wage. So I’m going to pay $15 an hour.” Which means your entry level intern is making fifty-two grand, while your chief of staff, who has a very important role in a congressional office, now is capped at eighty, as opposed to the actual market rate on Capitol Hill, which is closer to $150,000. So everyone’s between 52 and 80. It’s actually socialism and communism on display.”

You have to wonder how much Hegseth is getting paid, since being able to do simple math is apparently not a requirement for his job. His claim that $15.00 an hour would be $52,000 per year is only off by $20,800. But more importantly, his contention that an employer choosing to set salaries as she sees fit is tantamount to communism proves that he is as bad at political science as he is at math.

Employers make these decisions based on multiple factors, including experience, recruiting, workplace morale, retention, and yes, even personal values. But according to Hegseth, all employers should be bound by externally imposed rules that may not satisfy their business goals. That’s actually closer to communism than anything Ocasio-Cortez has done. And it’s closer to assholery than anyone spewing opinions on television should be allowed to get away with.

In which Fox attacks @AOC paying her staffers a living wage as "communism" and botches basic math by deciding that paying interns $15 an hour means an "entry level intern will be making 52 grand" pic.twitter.com/73AaIUZ0eE