The 91st Academy Awards was broadcast on Sunday night to the millions of fans of the cinema and celebrities. But there was one viewer that wasn’t especially pleased with what he saw. Although the Oscars were aired on the eve of Trump’s trip to Vietnam for a second summit with his BFF (“We fell in love”) Kim Jong Un, Donald Trump wasn’t bothering to prepare. Instead, he was gathering rage at what he assumed was Hollywood liberals disparaging him. 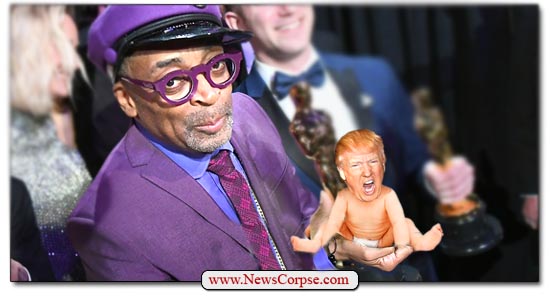 Perhaps the most notable incident of Trump projecting himself into the event involved Spike Lee’s acceptance speech (video below). He won the Best Adapted Screenplay Oscar for his film BlacKkKlansman. He concluded his remarks by saying:

“If we all connect with our ancestors we will have love and wisdom regained. We will regain our humanity. It will be a powerful moment. The 2020 presidential election is around the corner. Let’s all mobilize. Let’s all be on the right side of history. Make the moral choice between love versus hate. Let’s do the right thing.”

Notice that Lee never mentioned Trump by name. He was speaking about history, humanity, love, and morality. So naturally Trump took it as a insult directed squarely at him:

Be nice if Spike Lee could read his notes, or better yet not have to use notes at all, when doing his racist hit on your President, who has done more for African Americans (Criminal Justice Reform, Lowest Unemployment numbers in History, Tax Cuts,etc.) than almost any other Pres!

First of all, Trump’s swipe at Lee’s note reading is a peculiar line of attack for him. After all, he cannot speak coherently without his ever-present TelePrompter (or even with it). And when Trump goes off script, that’s when he usually commits his most idiotic and damaging gaffes. But Trump went further by calling Lee’s remarks a “racist hit on your President.” What part of Lee’s speech could possibly be characterized that way?

Finally, Trump rattled off his routine ego-boosting self-praise about what a god-send he has been for African-Americans. Never mind that nothing he’s done has contributed to the welfare of the black community. To the contrary, Trump has exacerbated hostilities and the rise of racist hate groups across the country.

Nevertheless, Trump personalized Lee’s inspiring comments and turned them into a perceived put-down. It’s impossible for Trump to see anything as not being about him. And whether it’s a holiday or a funeral, Trump can only view it in terms of how it affects him.

However, in this case he’s got a point. Because any reference to overtly racist behavior can easily be associated with Trump, the first president to receive an endorsement from a Grand Wizard of the Ku Klux Klan (David Duke), and the full support of the Nazi website, Daily Stormer. And if you are ever asked to “do the right thing,” you can be confident that that really means to vote against Donald Trump.