A couple of years ago Fox News was regarded as an invincible monolith on cable news that no other network could challenge. It was a fallacy created by their catering to a hard-core right-wing constituency that behaved like mesmerized cult worshipers, but it had the effect of corralling the whole demographic into a plurality of viewers while the other networks divided the rest of the audience. 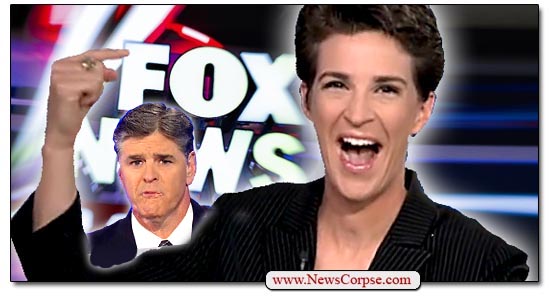 However, that tactic has lost its potency. Ever since the midterm election in early November, the Rachel Maddow Show has dominated her time period and helped to boost the ratings of her MSNBC colleagues. For four straight months Maddow has beaten the previous time period champ, Sean Hannity, by significant margins.

For the month of February Maddow’s ratings improved by nine percent over the prior year. She was the most-watched cable news program among adults 25-54. She won all but three nights in the entire month. Meanwhile, Fox News has been struggling to keep people tuned in. Tucker Carlson was down four percent year-over-year in total viewers. Laura Ingraham was down six percent. And Hannity was off seven percent. In the coveted advertiser demo of 25-54 year olds, Hannity has lost nearly a quarter (23%) of his audience. In fact, the whole Fox News primetime roster is down in the demo by twenty percent.

The dominance of Maddow’s program has increased over time. And on February 27 (the day following the House Oversight Committee’s hearing with testimony by Donald Trump’s former lawyer Michael Cohen), she had the highest rating ever for her show. This performance has resulted in MSNBC achieving ratings records overall. From Morning Joe in the AM, to Nicolle Wallace in the afternoon, to primetime, MSNBC has enjoyed double digit growth.

In addition to Fox’s ratings woes, they are also suffering an exodus of advertisers. Some of that is due to their declining ratings, but most of it is because advertisers just don’t want to be associated with programs that advocate bigotry and promote violence. It’s gotten so bad that the ad sales folks at Fox are afraid to even try selling these shows to advertisers. Consequently, Trump has had to be enlisted in a campaign to rescue the failing network’s biggest “stars.” And it’s a two-way street with Fox hosts like Hannity and Jeanine Pirro showing up at Trump’s cult rallies.

Television ratings can be fluid and swerve back and forth between various networks and programs. But the rise of MSNBC has defied the predictions of most analysts. And their sustained dominance over many months has been particularly surprising. This is no fluke. And it is not likely a coincidence that this success has occurred as Democrats have increased their presence in Washington, and the legal peril for Trump has exploded.

As Trump’s prospects continue to decline, more people will tune in to MSNBC for the real news that Fox ignores and suppresses. And as more people become informed, Trump’s fortunes will wither even more. It’s beautiful downward spiral for a criminal president and his TV sycophants.