It’s a glorious day of celebration for Donald Trump as he triumphantly tweets the results of a new poll from Georgetown University. His tweet proclaims with glee “Great news! #MAGA.” And below that thrilling exclamation is a graphic that Trump copied straight from Fox News. 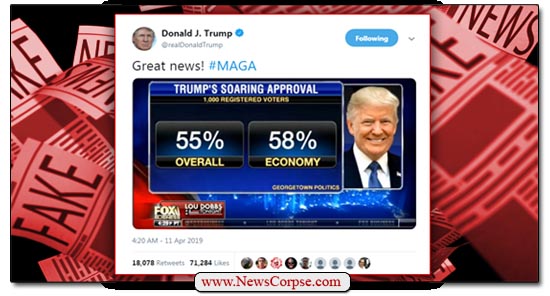 There must be unbridled joy right about now in the White House because these numbers are higher than almost any that Trump has ever received from any poll, including the wildly biased Rasmussen. So a little bragging by Trump for achieving a fifty-five percent approval rating would seem to be in order. There’s just one little problem.

The graphic that Trump is so proudly regurgitating from Fox News’ Lou Dobbs is terribly wrong. The poll from Georgetown actually has Trump with a forty-three percent approval rating. That’s more in line with the current average of polls by RealClear Politics (43.1%). And it’s only that high because it includes Rasmussen’s phony numbers. The fifty-five percent was actually the disapproval rating for Trump.

The rest of the poll was hardly positive for for the pitiful President. It shows that fifty-seven percent of voters overall say the country is on the wrong track. And while men polled say they will vote Republican by a margin of nine percent, twice as many women (18%), who are more reliable voters, say they will vote Democratic.

Fox News issued a brief correction (a minute into this clip) that talked more about what the graphic got right than about their massive mistake. And they never mention Trump’s dismal forty-three percent approval:

“It’s been a quiet start to the day for President Trump, though he did send out a tweet this morning from the Lou Dobbs show last night on Fox Business. That tweet featured a poll that was not entirely accurate, which Fox Business would like to correct.

“According to a poll from Georgetown University, 58 percent of respondents approved of the president’s handling of the economy. That portion of the graphic was right. However, the graphic also showed that 55 percent of the respondents approve of the president, that number is not correct. The 55 percent number was those who have an unfavorable impression of President Trump.”

This is another example of how Fox News distorts reality and disseminates lies with the help of their number one fan, Donald Trump. And six hours later, Trump’s fake poll tweet is still on his Twitter page. It’s almost like Fox produces these lies for Trump to post, and then leaves them there purposefully to continue their disinformation campaign. They would never do that, would they?