Sometimes there just really isn’t anything more to say about Donald Trump’s rapidly declining mental state than what he says himself. With each new day day he demonstrates the severity his cognitive infirmities. Much of the evidence is implicit in his incessant lying. At other times he just utters blatant absurdities that have no relationship to reality. 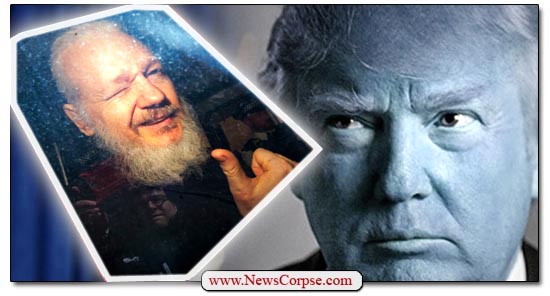 On Thursday Trump managed to unleash a statement that is difficult to define in terms of its psychological maladjustment. It is both a lie and and a ludicrous assertion that no sensible person could hear without collapsing in hysterics. Because after spending years lauding Julian Assange and WikiLeaks, Trump now says that “I know nothing about WikiLeaks, it’s not my thing.” What a convenient dismissal just hours after Assange was placed under arrest and charged with multiple felonies.

WATCH: In 2016, President Trump said: "I love reading those Wikileaks."

Today: "I know nothing about WikiLeaks. It's not my thing. And uh, I know there is something having to do with Julian Assange." #MTPDaily pic.twitter.com/geelyD3aPL

Um…Okay. We’ll just ignore all of those references you made to it during the 2016 campaign. And never mind all of these tweets that are still on your Twitter feed:

In order to try and deflect the horror and stupidity of the Wikileakes disaster, the Dems said maybe it is Russia dealing with Trump. Crazy!

I hope people are looking at the disgraceful behavior of Hillary Clinton as exposed by WikiLeaks. She is unfit to run.

We've all wondered how Hillary avoided prosecution for her email scheme. Wikileaks may have found the answer. Obama! https://t.co/xF0wv8Oa8q

WikiLeaks proves even the Clinton campaign knew Crooked mishandled classified info, but no one gets charged? RIGGED! https://t.co/FgGxDsS0a1

Huma calls it a "MESS," the rest of us call it CORRUPT! WikiLeaks catches Crooked in the act – again.#DrainTheSwamp https://t.co/juvdLIJPWu

Nearly every one of those tweets is an attack on Trump’s 2016 opponent, Hillary Clinton. Which only provides additional evidence that Trump was colluding with WikiLeaks – who was in bed with Russia – during the campaign in order to win the election by cheating, lying, theft, and foreign interference.

Trump’s attempt to gaslight the nation by pretending to have no knowledge of WikiLeaks now is pathetic, disturbing, and eminently Trumpian. The whole world witnessed his affection for Assange and company. And anyone who believes his current denial is desperately in need of intense psychological therapy. What a sorry state our country is in when so many people can be lured into such ignorance and cult-style faith in an obvious charlatan.

3 thoughts on “How Crazy Sick is Trump? He Now Says ‘I Know Nothing About WikiLeaks’ or Julian Assange”