On Tuesday the House Judiciary Committee tried to get former Trump campaign manager Corey Lewandowski to respond a few questions about his interactions with Donald Trump. It predictably descended into a chaotic spectacle of deflection, lies, and bogus claims of “privilege” in order to avoid providing honest answers to simple questions. Lewandowski demonstrated a keen ability to parrot the obnoxious rhetorical patter of Trump as he showed complete disrespect for the truth. 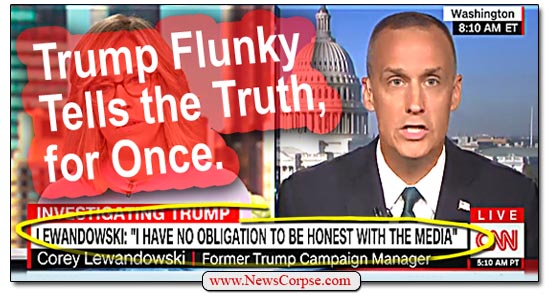 In his testimony, Lewandowski repeatedly tried to claim that he could simply refuse to answer questions because Trump asked him not to. That has no basis in the law or reason. In fact, it is brazen contempt of Congress, which members of the Committee are reviewing to determine whether or not to press charges. Lewandowski also implicated himself and Trump in a conspiracy to obstruct justice by putting pressure on then-Attorney General Jeff sessions to drop or otherwise hamstring the investigation by special counsel Robert Mueller.

However, the most striking remarks by Lewandowski came when he was asked by the Committee’s legal counsel, Barry Berke, about comments he made on MSNBC’s The Beat with Ari Melber. Lewandowski told Melbar that he had no conversations with Mueller regarding Trump’s efforts to interfere with the investigation. But, as Berke got Lewandowski to admit, that was not true. Then, in his defense, Lewandowski said that “I have no obligation to be honest with the media.”

Lewandowski admitted that he lied to the media and the American people.

Here it is in his own words. pic.twitter.com/dsAhlqqycm

Let that sink in. A top associate of the President of the United States admitted before Congress, and on national TV, that he lies to the press. Of course, we all know that Trump lies shamelessly nearly every time he opens his mouth. And his official spokespersons openly admit that they employ “alternative facts” to avoid telling the truth. But this admission is particularly galling because it was said with pride as if it were a virtue.

What the American people need to remember is that lying to the media is actually lying to them. No one tells anything to the press because they want the press to know it. They talk to the press in order to relay their comments to the public. So when Lewandowski says that he has “no obligation to be honest with the media,” he really saying that has no obligation to be honest with the American people. And that is also the established doctrine of the Trump administration.

Lewandowski proved that he couldn’t care less about lying to the public when he appeared on CNN the day after his congressional hearing. Why CNN even bothered to interview someone who brags that he will lie to them is troubling in itself. But Lewandowski was, ironically, true to his word by lying flagrantly throughout what turned into a mud-slinging shoutdown by Lewandowski (video below). Among the glaring untruths were his contention that the Mueller Report concluded that there was “no collusion, no obstruction” by Trump. That was contracted by Mueller himself when he testified before Congress. Also, Lewandowski was forced to admit that he had never even read the Mueller report. He also lied about whether the report he hadn’t bothered to read contained ten documented instances of Trump obstructing justice.

The media really needs to show better judgement when booking guests. They should not be helping admitted liars gain a national platform to propagate their lies. That is a disservice to their audience and it stains the reputation of the press. People like Lewandowski, Sarah Huckabee Sanders, amd Kellyanne Conway should be confined to Fox News where their their lies are appreciated and disseminated to glassy-eyed Deplorables who consume lies like candy. And that may also apply to the biggest liar of all, Donald Trump.

7 thoughts on “Trump Flunky Lewandowski Admits Lying to the Media, AKA the American People”