Donald Trump is in full meltdown mode as he ineffectually tries to deal with his impending impeachment. He’s panicking because he knows what he’s done and that the truth is going to come out no matter how many obstacles and lies he puts in its path. He has no control over this process that he’s now disgustingly calling a “lynching,” even though it’s actually a constitutional remedy for the political poison Trump is leaching into the American system. Has a president of the United States ever whined more about being a victim?

On Monday Trump was so frantic with fear that he embarked on a twenty-two (22!) tweet tirade attacking Adam Schiff, the Chairman of the House Intelligence Committee. This onslaught was mainly aimed at the news of a pathetic and useless attempt by Republicans in the House to censure Schiff. That effort went down in a party line vote, as anyone not in coma would have expected. But to Trump it was a lifeline that merited a tweetstorm including seven posts from Fox News sycophants supporting His Lameness.

In the midst of these harangues, Trump must not have been paying close attention to his demented self-defense duties. Sure, he included a couple of allegedly humorous tweets from Fox’s Greg Gutfeld (which reminded us of why there aren’t any conservative comics), and he posted a clip from slobbering Trump-fluffer Lou Dobbs interviewing wingnut Rep. Jim Jordan, and he even dropped one featuring Newt Gingrich, who led the impeachment against Bill Clinton for having an extramarital affair with a young staffer while he was having an extramarital affair with a young staffer. But nothing comes close to the fantabulousness of this: 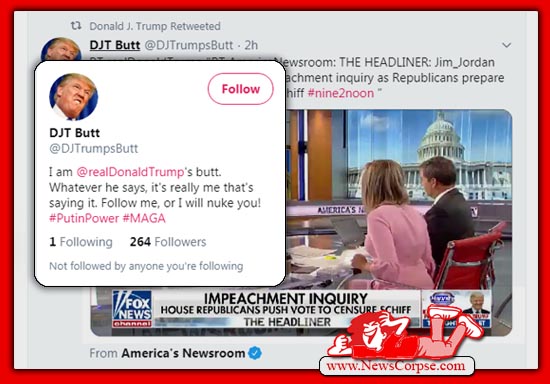 That’s right. Trump retweeted DJTrump’s Butt! The profile for that account notes that “I am @realDonaldTrump’s butt. Whatever he says, it’s really me that’s saying it. Follow me, or I will nuke you! #PutinPower #MAGA.” So now we know where the President has been getting all of his blitheringly ignorant ideas from, and why he continually embarrasses himself with idiotic comments that demonstrate how little he knows about virtually everything. This is the reason he’s been stinking up America.

Trump’s obsession with Schiff stems from a brief portion of remarks made in a congressional hearing that Trump utterly failed to understand. Apparently Trump doesn’t grasp the concept of paraphrasing with emphasis to make a point. That’s what Schiff was doing when Trump whined, falsely, that Schiff was quoting him verbatim. Schiff actually prefaced his remarks by saying that Trump’s phone call with the president of Ukraine “reads like a classic organized crime shakedown. Shorn of its rambling character, and in not so many words, this is the essence of what the President communicates.” So contrary to Trump’s brazen lie, Schiff was not quoting him and had no intention of misleading anyone.

Nevertheless, Trump has been ranting about Schiff ever since. He’s even accused Schiff and House Speaker Nancy Pelosi of treason and “demanded” that they resign, as if he has the authority to issue such impotent demands. The fact that he thinks he has that power obviously comes from the same place the rest of his puerile nonsense comes from: DJTrumpsButt. Mystery solved.