On Monday morning Donald Trump whisked off to London for a summit with NATO, the international alliance that he repeatedly disparages. That is, at least, when he isn’t shilling for Vladimir Putin and Russia to be admitted into the group that was formed to counter the hostile intentions of Russia. 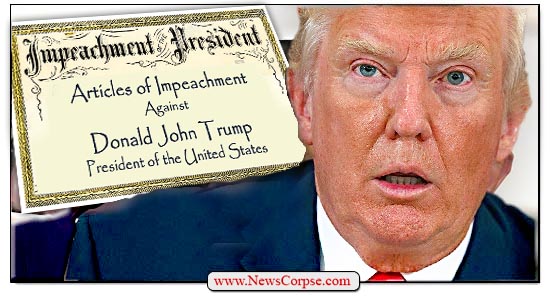 Prior to his departure, Trump felt it was necessary to whine some more about the impeachment proceedings in Congress. These are the proceedings that he said were unfair because they weren’t public. Then he complained when they became public. And he was furious that he wasn’t allowed to participate. But he is now refusing to accept an invitation to participate.

Trump is obviously afraid to appear under oath before the Judiciary Committee because he knows that if he tells the truth he is likely to further incriminate himself. But if he lies he’s committing perjury. So his only recourse is to tweet from the safety of his bedroom. And that’s what he did several times, addressing a new interview by Ukrainian President Volodymyr Zelensky that Trump said exonerates him:

Breaking News: The President of Ukraine has just again announced that President Trump has done nothing wrong with respect to Ukraine and our interactions or calls. If the Radical Left Democrats were sane, which they are not, it would be case over!

It will not surprise most people that Trump is lying. He simply made up this assertion that Zelensky said he “has done nothing wrong.” In fact, Zelensky said quite the opposite:

“Look, I never talked to the president from the position of a quid pro quo,” Zelenskiy told Time and a handful of European publications in an interview published Monday. “That’s not my thing. … I don’t want us to look like beggars. But you have to understand. We’re at war. If you’re our strategic partner, then you can’t go blocking anything for us. I think that’s just about fairness. It’s not about a quid pro quo. It just goes without saying.”

Trump zoned in on Zelensky’s comment that he never talked about a quid pro quo. But it’s clear that his meaning was that he didn’t want to portray his dealings with Trump as subservient. His complete statement in context shows that he was plainly concerned about Trump’s threat to “block” critical military aid, and that it doesn’t matter what you call the arrangement, it “goes without saying” that the aid and Ukraine’s concessions to Trump were inextricably intertwined.

However, that didn’t stop Trump from lying about Zelensky’s comments. He has been saying for months that there was no quid pro quo. Which is odd considering that his chief of staff, Mick Mulvaney, said there was. Even more damning, Trump actually admitted that there was indeed a quid pro quo on national television:

REPORTER: Mr. President, what exactly did you hope Zelensky would do about the Bidens after your phone call? Exactly.

TRUMP: I would think that if they’re honest about it they’d start a major investigation into the Bidens. It’s a very simple answer. They should investigate the Bidens.

It is truly mind boggling that there is anyone who still believes anything that Trump says. He lies with the reckless abandon of sociopathic con man. He even lies about the lies he told a few days, or even hours, before. Even one of his staunchest defenders on Fox News, Tucker Carlson, recently called Trump “a full-blown BS artist.” And that’s coming from someone who knows Trump well, and whose job relies on intimate knowledge of bullshitting.

6 thoughts on “WRONG! Trump Lies that Ukraine President Said He Did Nothing Wrong”