You have to wonder if Donald Trump is now actively seeking additional Articles of Impeachment that can be filed against him. Apparently “Abuse of Power” and “Obstruction of Congress” are not stigmatizing enough for a malignant narcissist who considers himself the greatest [fill in the blank] that the world has ever seen, not to mention the Earthly personification of “The Chosen One.”

Late on Friday night Trump embarked on a three hour Twitter-palooza that included panicky attacks on his perceived foes, fear-soaked cries of unfair persecution, and featured a random assortment of worshipful Twitter defenders, including QAnon crackpots. Trump tweeted until midnight, saving what he must have considered the best for last. The final post of this 40-plus, witching hour harangue was a tweet that could land Trump in even deeper impeachment trouble. The posting that Trump retweeted will not be linked here because of its profoundly illegal content and reckless endangerment of the innocent. But here is a graphic with appropriate redactions: 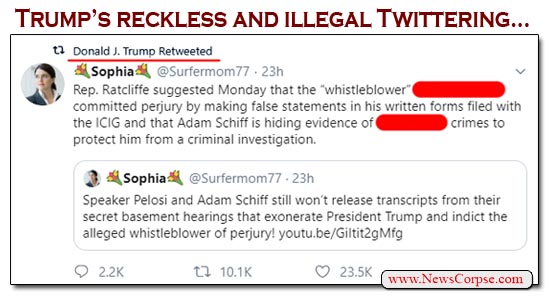 This tweet includes the name of someone that the original tweeter (Sophia), and Trump, are asserting outright is the whistleblower. Of course, they have no evidence to make such an assertion, and there is no credible validation of its accuracy. Nevertheless, Trump is disseminating this rumor as if it were true. There are two big problems with this.

The first problem is that it is unlawful to expose the identity of an anonymous whistleblower. The whistleblower statute is provided to protect the individual from harm and/or retaliation, and to maintain the right for others to safely come forward when they encounter government waste, fraud, abuse, and to protect public health and safety.

The second problem is that, because the identity of the whistleblower is still unknown, the person identified in this tweet could have nothing to do with this, but his/her welfare is still put in jeopardy. That is an act that is beyond reckless. It would be irresponsible for anyone to post this sort of information. but it’s far worse that a president would participate in such a potentially harmful act.

Trump is not only speculating about someone whose identity he doesn’t know, he is threatening the person with prosecution for perjury. That’s precisely the sort of retaliation that the Whistleblower statute prohibits. What’s more, there is no evidence of perjury. While Trump has repeatedly claimed that the whistleblower’s report was untrue, a simple comparison of the filing to the summary memo (what he falsely calls a transcript) of Trump’s phone call with the Ukrainian president shows that the whistleblower was correct on every point made. Trump himself has corroborated the whistleblower’s account.

But there is even more wrong with this tweet. For one thing, Sophia is not exactly a credible source. The picture in her Twitter profile is, in fact, a stock photo available from Getty Images. Furthermore, the text of her tweet is a verbatim copy from a three week old posting on the blog of a notorious, right-wing conspiracy nut, Jim Hoft (Gateway Pundit). The text of the tweet of her own that she retweeted was also copied from Hoft’s page. And it bizarrely claims that “secret” hearings exonerate Trump. But how could Sophia (Hoft) know that if they’re secret? And for the record, those hearings were open to both Democrats and Republicans.

Clearly Sophia is a dubious character who is endeavoring to plant and disseminate disinformation on the Internet. And Trump somehow managed to stumble upon this bogus account and retweet it. Coincidence? Who knows? But what is know for certain is that Trump has put an innocent person’s life in danger. (Note: the person is innocent whether or not he/she is the whistleblower). And he has also added to the potential list of legal breaches for which he can be impeached. If only the Senate would do its job with integrity and concern for the nation, rather than coddling the criminal occupying the White House.

UPDATE: This is bizarre. The Twitter account for “Sophia” (Surfermom77) has been deleted entirely. But when that name is entered it redirects to someone named “Emma” (2Samson67) that has all of the exact same content as Sophia. The tweet that Trump retweeted is still in the same place on his Twitter timeline, but now says it’s from Emma.

UPDATE II: Now Emma’s account is deleted and was replaced with “Leona” (2Leona65), which was also deleted and replaced with a second “Leona” (4Shereene4). All of these accounts have the same content (tweets) and say they are “100% Trump supporters” in California and joined Twitter in July 2013. They seem to be trying to evade detection and suspension by Twitter.

UPDATE III: And the parade of fake accounts continues. The second Leona has been deleted and replaced with “Gigi” (LovelyGigi33). Stay tuned.

UPDATE IV: The mysterious tweet that kept changing identities is now gone. But the damage was done, and Trump’s complicity in this deceit – and illegal naming an alleged whistleblower – needs to be fully investigated.