From the outset of the COVID-19 (coronavirus) pandemic, Donald Trump and his enablers at State TV (aka Fox News) have been producing an impressive amount of propaganda and outright lies. Trump spends the majority of his time at the Coronavirus Task Force briefings defending his abysmal record and yelling at reporters. He has, in fact, hijacked the briefings to transform them into campaign events for his reelection. And now Trump has ordered the Treasury Department to put his name on the stimulus checks that Congress allocated as relief for the severe economic hardship the nation is suffering. 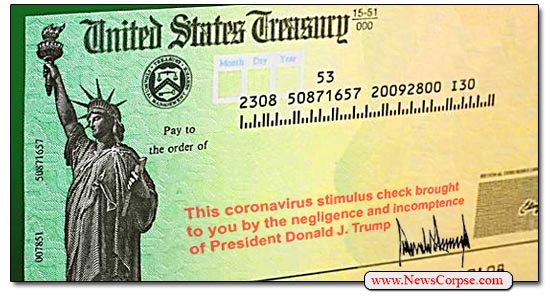 Never mind that it isn’t his money, it’s the American people’s money. Trump just wants to make sure that there is some acknowledgement that the checks are connected to him. He doesn’t need to worry about that. Most Americans already know that the only reason these checks had to be issued was due to Trump’s negligence and incompetence. Note also that some 80 million people will be getting these funds via direct deposit and will never see a paper check.

Meanwhile, Fox News continues to parrot whatever falsehoods and self-exalting disinformation flows from Trump and his regime. They recently ran a dangerously deceitful segment that actually asserted that the coronavirus “was not and is not a pandemic.” And their perversions of reality are having an impact, at least on those foolish enough to rely on Fox News.

The startling abundance of idiocy never ceases to amaze. Just this week Trump declared that as President he has “total authority” to force states to bend to his fascistic will (a position he didn’t really think through). He also announced that in the middle of a global pandemic he was halting funding to the World Health Organization (WHO), ostensibly because they were soft on China near the beginning of the crisis. But they weren’t nearly as soft as Trump:

China has been working very hard to contain the Coronavirus. The United States greatly appreciates their efforts and transparency. It will all work out well. In particular, on behalf of the American People, I want to thank President Xi!

As if that weren’t dumb enough, Trump’s senior White House counselor, Kellyanne Conway, visited the “Curvy Couch” potatoes of Fox and Friends for a little Trump-fluffing and cult sermonizing. Conway sought to defend Trump’s defunding of the WHO by accusing them of not adhering to the facts. Which makes her remarks ever more asinine:

“This is COVID-19, not COVID-1 folks, and so you would think the people in charge of the World Health Organization, facts and figures, would be on top of that.”

Kellyanne Conway: "This is COVID-19, not COVID-1 folks, and so you would think the people in charge of the World Health Organization, facts and figures, would be on top of that." pic.twitter.com/losQ3H4ZhW

Is it possible that Conway actually believes that the pandemic was caused by the nineteenth iteration of the coronavirus and that there were eighteen prior strains that we should have learned from? For the record, COVID-19 was named for being the coronavirus disease of 2019. And yet, this is her argument for adhering to the facts?

Well, to be fair, it was Kellyanne Conway who originated the phrase “alternative facts.” So it’s kind of her brand. But no one at Fox News bothered to correct her. And, in the end, it serves to validate the studies that have long proved that watching Fox News makes people stupider.

7 thoughts on “COVID-1? How Stupid are the Trump-Fluffing Hacks on Fox News?”