Throughout Donald Trump’s presidency he has demonstrated a profoundly noxious brand of racism. Whether it was hysterical fear mongering about non-existent caravans of Latino refugees, praise for the “fine people” participating in neo-Nazi protests, personal assaults on African-American Democrats, or just his refusal to appoint people of color to high-level posts in his administration, Trump’s bigotry has been consistent and hurtful. 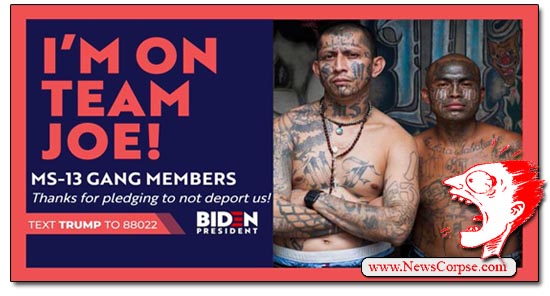 Now that we are in an election year, it would be expected that Trump would escalate his bigotry and seek to energize the most repulsively hateful segment of his Republican Party. And that’s just what he’s doing. On Thursday the official Trump Campaign Twitter account posted an unambiguously racist meme to attack Joe Biden. It features a photo (above, slightly modified) of stereotypical Latino gang members alongside a message asserting that they are “on Team Joe.”

This is reminiscent of the grotesquely racist “Willie Horton” political ad that George H.W. Bush and the Republicans used in the 1988 presidential campaign. Thirty-two years later their tactics have only gotten worse.

There is no connection whatsoever between the gang members in the photo and Vice-President Biden. He has never advocated for an end to deportations for any foreign nationals who commit crimes. Trump’s campaign outright invented this allegation in order to frighten his dimwitted supporters and motivate them to vote their hate in November. And the ad is not just a slam on Biden, it’s also an insult to all Latinos who Trump is tarring with the broad brush of violent criminality. For the record, the people in the ad aren’t even in the U.S. They are in prison in El Salvador.

This is standard operating procedure for the bigots of the GOP, and especially for Trump, whose racism goes back decades. Trump was caught discriminating against African-American rental applicants in his properties. He mounted a campaign to execute five African-Americans in New York who were wrongly convicted, and maintained his position even after they were proved innocent. And then there was Trump’s long and sordid history as America’s most prominent “birther,” insisting that Barack Obama was born in Kenya and, therefore, an illegitimate president.

By resorting to this sort of rancid campaign strategy, Trump is admitting that he’s in big trouble. His approval ratings are declining, even as he desperately and vainly attempts to craft an image of leadership during the coronavirus pandemic. He must know that the American people don’t believe a word he says. He’s even taken to citing polls that don’t exist. Every major poll in the real world shows him losing to Biden, even in many of the all-important swing states.

So naturally, Trump stoops to the lowest rung on the scale of political ethics. Given his stunted emotional maturity and his severe case of malignant narcissism, it’s the only way he knows how to respond. And unfortunately, it’s only going to get worse as election day draws nearer. Trump has demonstrated that he has no moral grounding outside of his acute egocentrism. And as the walls close in around him, he will kick and scream like a an over-sized baby throwing a tantrum. Which is pretty much the only thing he has ever done well.

Consequently, it is imperative that Democrats, independents, and even woke Republicans, stay alert, engaged, and committed to making America sane again. It will be tough a slog, but the fate of the nation rests on our endurance and determination to boot Trump and his criminal regime out of the White House and, hopefully, into the Big House. In the meantime, since Trump is so fond of vitriolic attacks, let’s see how he likes it (although this is actually pretty accurate)…