To anyone who thought that Fox News would become a more responsible and sane journalistic enterprise after the departure of Glenn Beck, your expectations have been dashed against the jagged rocks of reality (I told you so).

For the past couple of weeks Fox News has been engaging in a dogged effort to discredit the media watchdog group, Media Matters. They have sicced their most vicious attack poodles on them and openly beseeched their viewers to file complaints with the IRS to challenge Media Matters’ tax-exempt status. Every day they bump this two week old story to the top of their rabidly partisan web site, Fox Nation, above other more recent news. Their Saturday “News Watch” program devoted fully half the show to this one subject. But today they have taken a running leap off a cliff that leads to a Grand Canyon of stupidity, hilarity, and jaw-dropping shame.

Fox & Friends host Steve Doocy, perhaps the stupidest man on TV, brought in Glenn Beck’s co-author and “doctor” Keith Ablow for an interview that careened off into the surreal. Ablow pretended that he could psychoanalyze someone whom he has never examined or even met. That is a sign of certain quackery reminiscent of “doctor” Bill Frist’s pathetic attempt to diagnose the terminally ill and vegetative Terri Schiavo. Here is a portion of the exchange:

Steve Doocy: I understand you’ve done a psychological profile of [Media Matters founder] David Brock. What did you find?

Keith Ablow: Well, look, I looked at him from a distance, but you don’t have to look very hard to see into the man’s mind apparently. This is somebody who seemingly has such low self-esteem, Steve, that he’s lurching from one group to another. Whoever will embrace him and reassure him that he’s a decent guy and be his cheerleader in a dramatic way, that’s who he’s gonna be with. […] You can’t believe this guy because he’s full of self-hatred which he then projects on the world around him in order to get love. So he’s gotta have somebody to hate because he thinks that’s the way, the best way to galvanize the love in his direction. So yes, it’s always about being a hit man, you know, exposing someone. There’s very sexual connotations here too.

That is about as idiotic an appraisal as has ever been articulated aloud. I pity anyone who actually has this fraud as an analyst. Ablow has no basis whatsoever to arrive at his conclusions. He is merely taking obviously hostile swipes at someone he is being paid to disparage. He should have his license revoked. And with all of his brazen, personal animosity he fails to provide a single example of anything that Brock has done that is incorrect or unsubstantiated.

This attack is purely personal. Ablow’s notation of “lurching from one group to another” references the fact that Brock was once a conservative, but is now a liberal. However, Brock was a conservative for many years and, after evolving more to the left, he has remained liberal for the past decade. That behavior is hardly what any rational person would describe as “lurching.” In fact, it’s rather stable. Would Ablow also regard Andrew Breitbart, David Horowitz, Rick Perry, and Michele Bachmann as lurching, self-haters? They are all former Democrats or liberals.

Ablow neglects to explain what the “sexual connotations” are. He probably only raised that issue to remind his audience that Brock is openly gay, a factor that the Fox audience will regard as negative. At one point Ablow tried to inject that Brock’s having been adopted had some part in this absurd analysis, as if adoption is a precursor to the alleged self-hatred Ablow is inventing. And he signed off the segment by telling Doocy, in a declarative tone, that Brock is “A very dangerous man, my friend.”

Ablow is a very disturbed and unprofessional little weasel (I can’t bring myself to call him a man). His medical credibility is identical to the journalistic credibility of Fox News – Zero. No wonder he is their resident psychiatric expert. The prerequisite to becoming an expert on Fox News is to demonstrate that you have little knowledge of your professed field, and that you’re willing to use your ignorance to advance the Republican agenda.

In addition to this psycho-circus, Fox News also called upon faux-liberal Juan Williams to pile on Media Matters. In an interview with Doocy’s co-host, Brian Kilmeade, Williams said that Media Matters is “about ruining people and trying to take a company down – to destroy a company.” There was not even a hint of irony as he said this while he was trying to ruin people and destroy a company. Then Kilmeade closed the interview with this verbal and graphic appeal to viewers:

“If you want to file a complaint about Media Matters I want you to do this. Go to FoxNation.com and click on the “Justice”>/em> tab. We’ll take it from there.” 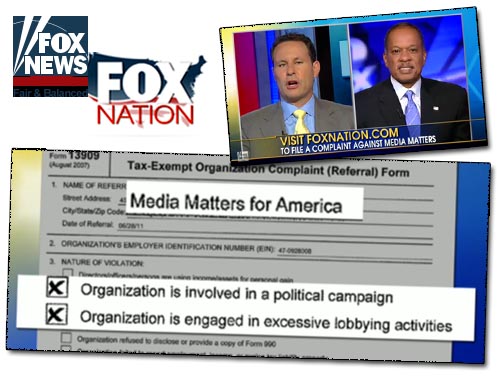 This is just the latest attempt to drive viewers to a web page where they can file their own complaint to the IRS. As I’ve noted previously, there is no merit to the argument that Media Matters is in violation of their tax-exempt status. To be in violation they would have to be engaging in substantial political (i.e. campaign) or lobbying (i.e. legislative) activities. Media Matters does neither. However, the instructions as presented in the graphic above advise Fox viewers to lie in their complaint. Let me repeat that: Fox is advising their viewers to LIE to the IRS! This is because the instruction to check the boxes for political campaigning and lobbying activities amounts to falsifying the form.

I defy anyone to supply an example of Media Matters either engaging in a political campaign or lobbying any member of any legislative body. Since no such examples have been supplied, the form would be a false representation. The only way that Media Matters can be construed as being in violation of their tax-exempt status by virtue of their attacking Fox, is if Fox is itself a political operation. Of course, Fox denies that. Were they to admit it we might have a different story. In the meantime, if these complaint forms required the complainant to sign under oath, then Fox would be guilty of suborning perjury. As it is they are merely guilty of attempting to flood the IRS with frivolous and phony paperwork. Which for conservatives seeking to reduce the cost and oversight of government is pretty hypocritical.

At the risk of being accused of psychoanalyzing Fox, I must observe that they are obviously scared. They are so afraid of Media Matters that they have become obsessed with destroying it. While most Americans have probably never heard of Media Matters, Fox is elevating them to the top of the news pile, even above Casey Anthony. They know that any organization that shines the light of truth on Fox News is going to make things difficult for an enterprise like Fox whose mission is to disseminate disinformation and keep viewers ignorant.

If you haven’t done so already, this would be a good time to join Media Matters.