Rupert Murdoch’s News Corp has been battling to suppress reports about a scandal threatening to upend the conservative media empire. Their British tabloid, News of the World (NotW), was caught hacking into the cell phones of politicians, celebrities, royals, and others, in order to find or manufacture salacious stories. But now Murdoch’s own Fox News is reporting this about the illegal campaign waged by its sister company: 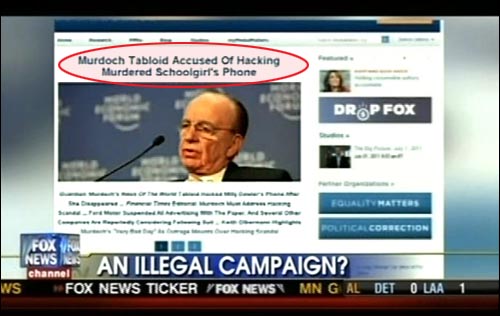 Fox News has assiduously avoided the embarrassing story. That would be consistent with their history of ignoring stories that reflect poorly on the company, no matter how relevant to the public interest. Are they now relenting and covering this major corporate scandal? Not on your life. The screen shot above is not actually from a story about the hacking scandal at all. It is from another assault in their current crusade against Media Matters. However, Fox inadvertently snapped a screen shot of the Media Matters web site that featured coverage of the hacking scandal. This is pretty much the only way the story will ever make it onto Fox News.

The headline from Media Matters, “Murdoch Tabloid Accused Of Hacking Murdered Schoolgirl’s Phone,” refers to a particularly despicable incident wherein NotW reporters hacked into the phone of a missing thirteen year old girl who was later discovered to have been murdered. They accessed her voicemail and even deleted messages after the mailbox became full to make room for more messages upon which they could eavesdrop. That action gave false hope to the girl’s family who assumed that she had deleted the messages herself and was therefore still alive. It also potentially destroyed evidence of the crime.

The new hacking allegations concerning the murdered girl have elevated the scandal to new and repulsive heights. In addition, new information is surfacing that reveals similar hacking into the phones of victims of London’s terrorist subway bombing. So while it funny that Fox News inadvertently posts this image that implicates them in a scandal, we must take seriously the threat that dishonest propagandists like Fox pose for our nation.