Never let it be said that Fox News isn’t wholly dedicated to their founding mission of denigrating Democrats at all times regardless of how deeply they have to descend into dishonesty. It’s a skill they’ve honed for twenty-five years, and they aren’t resting on their laurels. 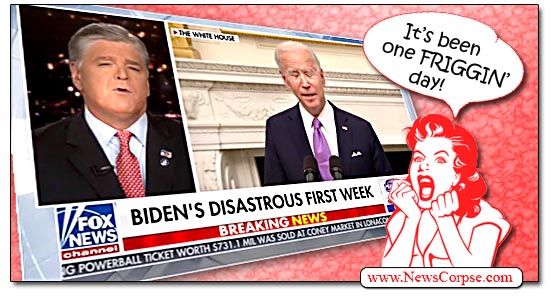 Joe Biden has been president for two days. But in Fox World that’s an eternity of dread. Consequently, they are already accelerating their notorious and irrational outrage with a barrage of utterly preposterous attacks that would make any credible journalist cringe. Luckily for Fox, they don’t have any credible journalists to worry about.

Which explains how they can run stories about “Biden’s Disastrous First Week” before the first day has gone by. That was the theme of Sean Hannity’s Hour of White Nationalism on Thursday night. Hannity dared to approach such subjects as Biden “begging for a break” when a reporter asked if his 100 vaccinations in 100 days was too low a bar. What Biden actually said was “When I announced it, you all said it was not possible. C’mon, gimme a break, man.” To Hannity, that familiar Biden phrase was “begging” and proof that “Apparently only one serious question from a reporter was a little too much for him to handle.”

Apparently Hannity has severe cognitive problems. But he was just getting started. Hannity went on to inadvisedly raise the question of Biden’s cognition in the same nauseatingly infantile manner that his fallen hero Donald Trump did. In a tirade against the bipartisan impeachment of Trump, Hannity lashed out saying that…

“At this point, a trial serves absolutely no purpose but to inflame the tensions of this country. It’s the swamp theater and it’s at its worst. The country should be asking tonight, Mr. Unity, Mr. Frail, Weak, Cognitively Struggling Joe, I know this is past your bedtime. Maybe you will consider standing up to the radicalism in your own party and put an end to the charade right now. I doubt that will happen. Joe and his fellow Democrats don’t seem to care about unity. All they want is revenge.”

Someone needs to educate Hannity about the purpose of impeachment. It is not just to slap the wrists of treasonous presidents. It is also important to establish a record of the crimes, prohibit the criminal from serving in federal office in the future, nullify perks such as pensions, office and travel allowances, security, and to deter future wrongdoers. And Hannity’s disingenuous remarks about unity land with a thud when they are said in the same breath as his insults.

Hannity was not alone in the Fox News rush to malign Biden. Fox’s newly minted White House correspondent, Peter Doocy, invented a bizarre and utterly false narrative about Biden violating his own mandate to wear masks. Brian Kilmeade wanted to know “Where in Joe Biden’s speech did he condemn Antifa?” Which is an organization that doesn’t actually exist. Tucker Carlson was concerned about Biden “opening the borders and crushing our country’s last remaining economic sector.” Neither of which Biden has advocated. And Laura Ingraham accused the Biden administration of “uniting behind lawlessness.” Which is a charge that is far more applicable to Trump and his confederates at Fox News. In fact, dozens of Trump’s associates have actually been indicted and/or convicted. For Biden the number of criminal cohorts is precisely zero.

There is a method to this madness by Fox News. It is their objective to whine about fake assertions that Biden and Democrats are neck deep in criminality and that the mainstream media is giving them a pass. Never mind that there is no evidence of the alleged crimes that Fox says are rampant. They are only interested in pushing the press to ramp up their negative coverage of Biden. Fox thinks that by inventing crimes, they can shame other reporters into covering them, or complain if they don’t.

Some news organizations may fall for this in order to avoid being accused of a bias in favor of Biden. But it isn’t biased to refrain from reporting intentionally fabricated allegations. And the media needs to be vigilant that they don’t wind up amplifying lies in the name of a fake standard of balance. Balance has never been a legitimate standard for journalism. Truth is the standard. You don’t interview a flat-earther to “balance” your coverage of a scientist who said the Earth is round. But that’s the goal of Fox’s knee-jerk attacks on Biden after only two days as President.

Biden addressed the “lies for profit” industry in his inaugural address. It was an unusually profound commentary that isn’t often brought up in inaugural speeches. Meanwhile, the Daily Show picked up on the nefarious intentions of Fox News and posted this enlightening video compilation:

I wanna be angry at these cretins for piling on Biden after just one day. But I can't stop laughing at how stupid they are. https://t.co/M925T6hQhE