It’s about time that we all finally recognize that you CAN make this up! The Republican party is notorious for manufacturing radical, rightist mythologies that conform to their dystopian world and self-serving political environments. They couldn’t care less if there are facts to support their half-baked diversions from reality. They are a factory for fantastical fiction. 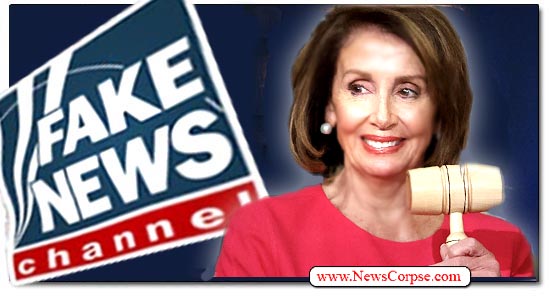 The latest GOP fractured fairy tale strives to achieve new lows of contempt for the truth and insensitivity toward the real victims of heinous crimes. And it’s brought to you by Fox News and some of the GOP’s most noxious and dishonest characters, including Jim Jordan and Devin Nunes. As Fox reported Monday morning…

The article is full of quotes by these Republican cretins making patently baseless charges regarding the security preparedness for the January 6th Congressional session where the Electoral College vote would be certified. That, of course, devolved into an insurrectionist coup attempt instigated by Donald Trump, who sent his cult disciple to the Capitol on mission to suppress democracy.

The charges in the letter are entirely speculative and intended to raise wholly unwarranted suspicions about House Speaker Nancy Pelosi that have no foundation in reality. They are brazenly smearing the Speaker in an attempt to tarnish her reputation while diverting attention from their own culpability. Their allegation rests on the fact that Pelosi, as Speaker, was responsible for security for the whole of Congress.

These Republican whiners want to make people forget that they were the ones who propped up Trump’s Big Lie about a “stolen election” that was the impetus for Trump’s Insurrectionists to attack the Congress while they were doing their constitutional duty. They were Trump’s accomplices in the assault on Congress, and his apologists afterward. But now they are trying to lay the blame on Pelosi, who was the target of Trump’s Seditionist Brigades. They think that she was a party to her own attempted assassination.

What’s more, the GOP congressmen make no mention of the fact that Sen. Mitch McConnell was the in charge of the Senate and would have had the very same authority for security as Pelosi does. But they aren’t condemning him or demanding that he answer their antagonistic questions. They are exhibiting rank partisanship while throwing around false allegations that Pelosi’s efforts to scrutinize the assault were partisan. Never mind that those efforts included appointing retired General Russel Honoré, a universally respected crisis management expert, to conduct an independent security review, and advocating for a 9/11-style, bipartisan commission to investigate the matter and its causes.

Pelosi’s chief of staff. Drew Hammill, responded to the letter saying that it was a…

“transparently partisan attempt to lay blame on the Speaker, who was a target of assassination during the insurrection fueled by the lies of House Republicans.”

“We look forward to these Ranking Members asking these same questions of former Senate Majority Leader Mitch McConnell. As the target of an assassination attempt, the Speaker knows all too well the importance of security at the Capitol and is focused on getting to the bottom of all issues facing the Capitol Complex and the events that led up to the insurrection. Clearly, these Republican Ranking Members do not share this priority.”

for Republicans to send this accusatory letter to Pelosi, the intended target of Trump’s insurrectionist mob, is abhorrent in the extreme. Particularly when they are the ones who are guilty of the crimes they are charging her with. But it’s also the predictable behavior of purposefully dishonest, moronic, conspiracy-obsessed, crackpots with nefarious agendas. And it’s what we should expect of them – and be prepared for – for the foreseeable future.

One thought on “Blaming the Victim: GOP Accuses Pelosi of Allowing the Capitol Riots that Targeted Her”