Apparently Fox News wasn’t satisfied with lying about the deadly coronavirus pandemic. Even though their deliberate, politically motivated distortions resulted in untold thousands of deaths that could have been avoided. That isn’t hyperbole. Studies have actually proven that watching Fox News increases COVID-19 fatalities. Some studies singled out watching Sean Hannity as being linked to higher rates of coronavirus deaths. 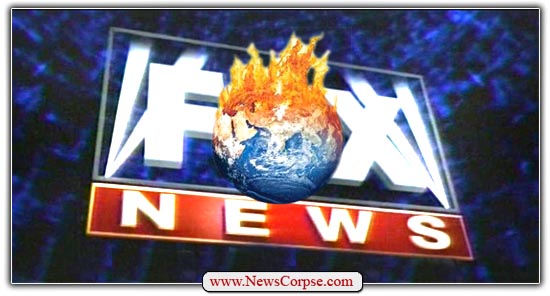 Now that there are historically severe winter storms ravaging much of the country, Fox News has made a typically idiotic, right-wing based, editorial decision to lie about that as well. Rather than just reporting the facts about the storm and how those battered by it can get help, Fox News is spreading ludicrous falsehoods and laying blame on their political foes.

The narrative that Fox is adopting is that somehow the Green New Deal and wind turbines are responsible for the power outages that have devastated Texas. Never mind that wind power represents a small portion of the power generation in Texas which is run by Republicans who have always been opposed to alternative energy sources. Fox News wants their viewers to believe that Alexandria Ocasio-Cortez is in charge of the Texas power grid and is conspiring to undermine it. That narrative was evident during an interview of Texas Gov. Greg Abbott on Hannity, where he said that…

“This shows how the Green New Deal would be a deadly deal for the United States of America. Texas is blessed with multiple sources of energy such as natural gas and nuclear, as well as solar and wind. Our wind and our solar got shot down and they were collectively more than 10 percent of our power grid. And that thrust Texas into a situation where we’re lacking power on a statewide basis.”

Abbott: This shows how the Green New Deal would be a deadly deal for the United States of America… pic.twitter.com/Q2jmZHcO6f

That is an unvarnished, flat out lie. Even if wind and solar “got shot down,” their contribution to the total energy supply in Texas would have had a negligible impact. Abbott’s own administration expert agreed as reported by the Daily Beast:

“A senior director for the Electric Reliability Council of Texas, however, said hours earlier that frozen wind turbines during the deadly winter storms have been ‘the least significant factor in the blackouts,’ noting that the main factors are ‘frozen instruments at natural gas, coal and even nuclear facilities.'” [More info here]

Meanwhile, fresh from his pathetic attack on Jill and Joe Biden’s marriage, the undisputed Champion of Fox News Assholery, Tucker Carlson, added to the avalanche of bullpucky by babbling out this barrage of nonsense:

“Unbeknownst to most people, the Green New Deal came to Texas. The power grids became totally reliant on windmills. Then it got cold and the windmills broke. Cause that’s what happens in the green new deal. You’re without power. Millions are still without power tonight. Several have died. Now the same energy policies that have wrecked Texas this week are going nationwide. They’re coming to your state.”

Nearly every word of that rant is deliberate deceit. The Green New Deal has not come to Texas, or anywhere else in the United States. It is currently a draft of bill in Congress that hasn’t been introduced or voted on. As noted above, the power grids in Texas are not “totally reliant on windmills,” or even minimally reliant. They didn’t break. They just need to be de-iced. That isn’t what happens in the Green New Deal. People are still without power because the fossil fuel sources have failed. And the energy policies that wrecked Texas were entirely the work of Republicans beholden to the fossil fuel industry.

The only things Carlson got right are that people have died (which he couldn’t care less about), and that eventually, with luck and hard work, the Green New Deal will be implemented across the country. Which will be a huge improvement over the archaic Dirty Old Deal. In the meantime, Fox News will continue to exploit tragedies in their zeal to advance a heartless, destructive, ultra-conservative agenda. And, of course, to juice their sagging ratings.