On the federal holiday commemorating the birth of civil rights icon Rev. Dr. Martin Luther King, the nation is called upon to reflect on King’s message of love, economic justice, and the nonviolent pursuit of equality. King’s legacy is one that inspires most Americans to join the crusade for moral enrichment and unity. 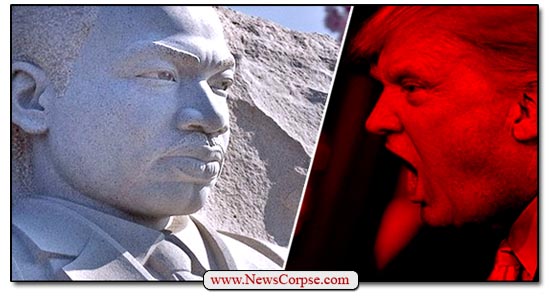 Sadly, there is still a small but significant minority that fails to grasp the merit of the movement that King inspired. And the leader of that rabble of regressives is Donald Trump. So it shouldn’t surprise anyone to learn that Trump stained this memorial day with the sort of rancid rhetoric that is his hallmark. Trump posted a statement (via his Twitter ban defying spokes-shill) that read…

“Will Morning Joe be canceled? He and Mika’s ratings are very low—they are having an extremely hard time finding an audience to listen to the Fake News they spurn. Losing them would be very sad—hope it doesn’t happen!”

Trump’s attack on MSNBC’s Morning Joe is typical Trumpian media bashing driven by vengeance and jealousy. He continues to demonstrate that he is obsessed with ratings as a measure of quality, as well as his ignorance on the subject. What’s more, his illiteracy is revealed again in his misuse of the word “spurn.” Trump’s assertion that the Morning Joe folks “spurn” fake news literally means that they reject it. So… thank you? And of course he appends a passive aggressive “hope” to confirm his enduring immaturity. But he was just getting started. And here is where Trump couldn’t contain his seething bigotry as he went after MSNBC host Joy Reid:

“On another front, looks like Unjoy Reid, the racist commentator on MSDNC (MSNBC), is toast. Her stupidity is only surpassed by her absolute lack of television persona. She never had it, and never will. The only thing she’s good at is spewing racist hate but obviously, no one is listening!”

The raging hatred in Trump’s statement is blatant and nauseating. And it isn’t the first time that he’s maligned Reid. For this tirade Trump began by childishly mocking Reid’s first name. And he couldn’t even think of an original epithet. So he recycled the one he’s been using against the House Select Committee investigating the January 6th insurrection, which he, as the emotionally stunted adult that he is, calls the “unselect” Committee. Then he devolved further into bitter and baseless insults, attacking Reid as “racist” and “stupid.” Ironically, those are words that are far better descriptors of Trump.

It is unclear what triggered this attack on Reid, one of the few African-American women hosting television news programs. But it seems unlikely that it is just a coincidence that Trump lashed out at her on MLK Day without any discernible provocation. Perhaps he’s still upset that his favorite propaganda dispenser, OAN, is going to be dropped by DirecTV, their biggest distributor.

So maybe Trump is just swinging wildly at a cable news network that he regards as enemy (although he’s revealing that he watches it an awful lot). Or maybe he’s just a racist pig who gets off on spreading hate and denigrating women (as Fox News does) every chance he gets. Either way, his noxious attitude and insensitivity toward this solemn holiday is precisely what one would expect of Trump. So at least he is consistent.