Fox News is well known for unleashing furious assaults on their ideological foes that are drenched with blatant falsehoods. It is a daily, even hourly, occurrence. But no one is more adept at bloviating with mouth-foaming anger than the host of their Weekend Hour of Glower, “Unfiltered with Dan Bongino.” A better title might be “Unbalanced.” 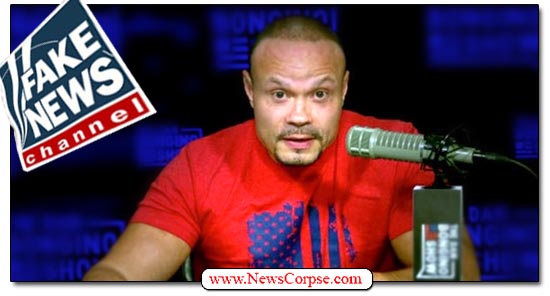 On Saturday’s episode of the program, Bongino ventured into familiar territory as he bellowed bombastically against liberals that he portrayed as disseminators of disinformation. His rancid raging (video below) was typically devoid of substance or any factual basis. He babbled that…

“One of the left’s favorite weapons has been the misinformation, or disinformation, label. They love it. They slap it onto anything that doesn’t tow their political line. They use it to paint real experts and genuine people as conspiracy theorists just to ban voices they don’t like.

Bongino’s complaints about “the left” weaponizing information could not be more hypocritical. It’s what he has built his career as a Fox News bullspitter on. It’s what recently got him banned on YouTube. And what he regards as “real experts” are invariably crackpots who are the definition of “conspiracy theorists.”

Then, as an example of his theme, Bongino cited a tweet posted by White House press secretary Jen Psaki that was merely linking to a well sourced article about intelligence officials who raised valid concerns about Russian propaganda:

The Politico article revealed that…

“More than 50 former senior intelligence officials have signed on to a letter outlining their belief that the recent disclosure of emails allegedly belonging to Joe Biden’s son ‘has all the classic earmarks of a Russian information operation.'”

So Psaki’s tweet was not only not disinformation, it was affirmed by dozens of intelligence officials. What’s more, those officials weren’t trying to deceive anyone with their letter of concern. They even qualified their analysis, saying that…

Among the factors they might have been referring to are the fact that the “information” was being provided by known liars, the New York Post and Rudy Giuliani. But Bongino wasn’t through casting ludicrous aspersions. He went on to falsely assert that a New York Times effort to obtain Hunter Biden’s emails validated his allegations of disinformation. But without knowing the contents of the emails, he can’t reasonably make such an assertion. Except on Fox News.

What makes this blather all the more despicable is that Bongino himself had engaged in verifiable disinformation the same evening. He displayed a graphic during a segment on his program that was headlined, “Top Ten Most Unhealthy U.S. Cities.” But as it turned out, the cities he displayed, according to his own source, were actually the top ten “healthiest” cities to live in:

Dan Bongino's Fox show took a website's list of the most healthy US cities and turned it into a graphic titled "TOP TEN MOST UNHEALTHY U.S. CITIES," which it used to back Bongino's claim that Democrats don't care about urban deaths. Nice catch by @Acyn. https://t.co/E7fVhkbOYf

So Bongino got it completely backwards. His intention to malign Democrats as being responsible for managing unhealthy cities actually confirmed that they were the best at managing the health of their constituents. In fact, all ten of the least healthy cities in the study were in blood red Republican states.

It was literally impossible for Bongino to be more wrong. And he knew it. In a later re-airing of the segment, the erroneous graphic was removed. However, there was never a correction made or any acknowledgement of the previous lie-filled report. But then no one would have expected that from Fox News anyway. They’re too busy creating new disinformation and false accusations against others.

UPDATE: A week after Bongino’s embarrassingly dishonest report he offered a pitifully insufficient “apology” that simply said that “a graphic was aired with inaccurate information.” He didn’t bother to correct the error or provide the accurate info.

"The left is desperate to silence you”@dbongino exposes the Democrats’ attempt to censor the truckers’ freedom convoy in a powerful opening monologue pic.twitter.com/2X9C72buzf