At a time when there is an international crisis brewing between Russia and the West over the sovereignty of Ukraine, it is particularly unsettling to witness the ongoing love affair that Donald Trump and his anti-American confederates have with Russia’s brutal dictator, Vladimir Putin. Lately Trump has been openly siding with Putin and against the U.S. even more than he usually does. 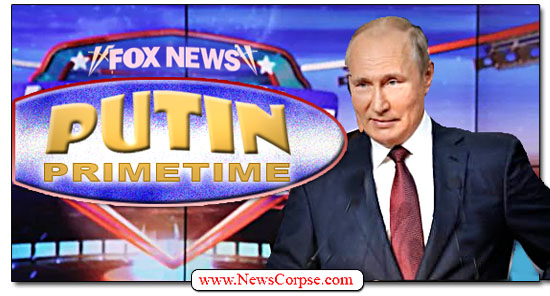 However, no one is more smitten with Putin than Fox News Vlad lover, Tucker Carlson. Night after night, Carlson pines for his paramour Putin, who he defends fiercely and praises ceaselessly. And on Tuesday night he unleashed a nauseatingly lovesick lecture on why nobody should hate Putin. Carlson’s litany of justifications for excusing Putin’s barbarous reign exceeded even his own prior expressions of adoration. He led off by bizarrely claiming that “Democrats in Washington have told you it’s your patriotic duty to hate Vladimir Putin.” Then he launched this hideous harangue…

“It might be worth asking yourself, since it is getting pretty serious: What is this really about? Why do I hate Putin so much? Has Putin ever called me a racist? Has he threatened to get me fired for disagreeing with him? Has he shipped every middle-class job in my town to Russia? Did he manufacture a worldwide pandemic that wrecked my business and kept me indoors for two years? Is he teaching my children to embrace racial discrimination? Is he making fentanyl? Is he trying to snuff out Christianity? Does he eat dogs? These are fair questions. And the answer to all of them is ‘No.'”

This is beyond dangerous, to say the least https://t.co/n76SrvS3dr

First of all, nobody is pushing for anyone to “hate” Putin. But decent, freedom loving people do think Putin’s inhumane totalitarianism should be vigorously opposed. That leaves out people like Carlson and Trump, who are unnaturally drawn to domineering dictators.

More to the point, Carlson’s rant consists mostly of personal grievances. He’s saying that, since Putin has never directly offended him by calling him a racist (which he is), then he’s a stand up guy. What’s more, Carlson is implying that Democrats have committed the offenses in his tedious tirade, from sending jobs to Russia (which is Trump’s thing), to manufacturing a pandemic (that Democrats have worked to end with little help from the GOP), to teaching children to be racists (like Carlson), to eating dogs (???). None of that is remotely connected to reality.

What Carlson thinks are “fair questions” could be bounced right back to him. Hey Tucker, it might be worth asking yourself: Why do you hate Hitler so much? Or Charles Manson? Or Osama bin Laden? None of them did any of the things you just rattled off either. Does that mean they are all upstanding examples of morality and warrant your respect and support?

For the record, there are plenty of good reasons to hate Putin, if one was so disposed. He has poisoned his political opponents and had critics assassinated. He’s rigged elections and shut down media. He’s suppressed LGBTQ+ persons and minorities. He’s invaded and annexed other nations and supported overthrowing democratic governments. He’s imposed propaganda in the press and in schools. He’s made himself president for life. and then there’s that little thing about his having interfered illegally in American elections on Trump’s behalf.

For much of the rest of this segment wherein he glorified Putin, Carlson bashed American leaders at a time when they are trying to avert war. He went after President Biden, of course, He spent an inordinate amount of time maligning Vice-President Kamala Harris. He sarcastically mocked America as a “superpower” that “would never put a senile man and an imbecile in charge of the country.” And he wasn’t even talking about Trump and Pence.

Not to be left out, Trump posted a statement Wednesday morning that similarly celebrated Putin, while insulting the man that the American people elected and who, unlike Trump or Carlson, is working to keep them safe and improve their lives. “Putin is playing Biden like a drum,” Trump tweeted. “It is not a pretty thing to watch!”

Trump is perhaps the worst person on the planet to talk about being “played” by Putin. His own national security aide, Fiona Hill, said that “There’s no Team America for Trump. Not once did I see him do anything to put America first. Not once. Not for a single second.” And his communications director, Stephanie Grisham, revealed that he reassured Putin that “I’m going to act a little tougher with you for a few minutes. But it’s for the cameras, and after they leave we’ll talk.” And who could forget the infamous Helsinki Treason Summit? Maybe the real reason that Trump is upset because bending over for Putin is his thing.