In one of this year’s most glaring self-owns, insurrectionist representative Matt Gaetz (FL-QAnon) posted a tweet that he surely thought would devastate the liberals that he hates so passionately. But, as usual, he could not have been more mistaken. 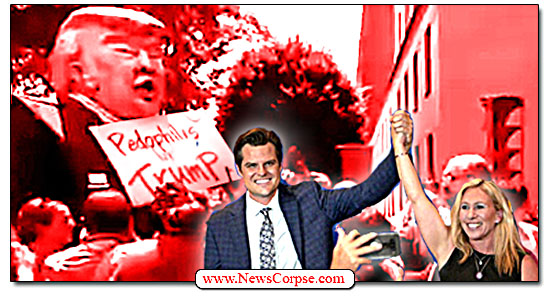 On Monday an unauthorized release of a draft opinion by the conservative wing of the Supreme Court indicated that they would be overturning the abortion precedent set by the Roe v Wade ruling fifty years ago. The Republican Party immediately sought to ignore the harm done to the rights of American women, and liberty in general, and instead focused on portraying themselves as victims (again) of a plot to embarrass them by revealing to the public what they are actually doing.

While there were innumerable bad takes on this news by rightist partisans in politics and the press, none were as cringeworthy as the one from Matt Gaetz who tweeted…

“How many of the women rallying against overturning Roe are over-educated, under-loved millennials who sadly return from protests to a lonely microwave dinner with their cats, and no bumble matches?”

How many of the women rallying against overturning Roe are over-educated, under-loved millennials who sadly return from protests to a lonely microwave dinner with their cats, and no bumble matches?

Seriously? Let’s set aside for the moment that Gaetz is disparaging adult women who had the audacity to get an education. What were they thinking? What’s truly nauseating about this comment is that Gaetz is exposing his own heinous predilection for girls with limited education because they were still in high school. He is currently under investigation for allegedly having sex with an underage girl who he reportedly paid and transported across state lines.

Like his cult messiah, Donald Trump, Gaetz “loves the poorly educated.” Presumably that’s because they are the only ones who will fall for his bullsh*t. He is explicitly criticizing backers of Roe v Wade because of their academic achievement. That’s something that he appears to regard as a personality flaw that he discourages among his constituents. He’s also opposed to microwave ovens and pets, which further illustrates just how out of touch he is with most Americans.

Gaetz ought to be more concerned with “How many of the women rallying against overturning Roe” live in his district. Nationally, the support for Roe v Wade is more than 69%. Perhaps Gaetz is worried about millions of women – and men – rallying to defend reproductive rights because he couldn’t get a handful of supporters to show up at recent protest that he organized with fellow insurrectionist, Marjorie Taylor Greene.

The spectacle of a man who is being investigated for unlawful sex with a minor attempting to mock reproductive rights supporters for being educated adults is, sadly, all too typical of the Republican Party. And no one exemplifies that perversion better than Matt Gaetz. And for some puzzling reason, he does publicly as if he’s proud of it.

5 thoughts on “Matt Gaetz Gripes that Women Supporting Roe v Wade are Too Smart and Too Old – For Him?”