Three months ago Steve Bannon, the former campaign chairman for Donald Trump, was found guilty on two counts of contempt of Congress. And on Friday he was sentenced to serve four months in prison and pay a $6,500.00 fine. This is just the beginning of Bannon’s legal burdens, but it’s a start. 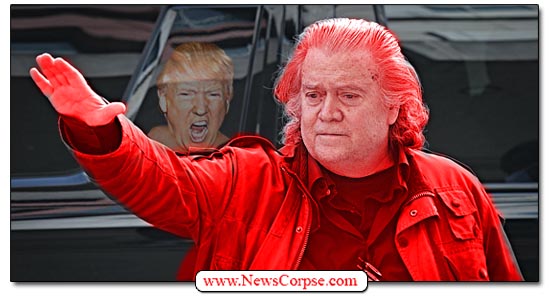 Shortly after the sentence was announced, the usual suspects from Trump’s Cult Defense Brigade commenced their whining and whitewashing on Bannon’s behalf. There was an outpouring of solidarity for a man who was previously convicted of defrauding Trump’s own supporters with a phony fund to build a border wall. Bannon was pardoned by Trump for that conviction. But he is still facing legal peril as a co-conspirator in a plot to overthrow the United States government.

Bannon has already promised to appeal the conviction on grounds that he was only following his lawyer’s advice. That’s a bizarre argument that seeks to excuse any criminal behavior if your lawyer suggests it. First of all, the client is responsible for accepting or rejecting the advice of an attorney. Secondly, if an attorney advises a client to break the law, that attorney’s license should be revoked.

Bannon’s appeal is unlikely to succeed and he will eventually be incarcerated. However, he won’t be alone – at least in spirit. Many loyal StormTrumpers are pledging to “Stand With Steve Bannon!” First and foremost is Lisa Boothe of Fox News who said that…

“I stand with Steve Bannon. This isn’t justice. It’s tyranny and total bullshit. We need to do this to Democrats when we regain power.”

I stand with Steve Bannon. This isn’t justice. It’s tyranny and total bullshit. We need to do this to Democrats when we regain power. https://t.co/KpQE1D8jCz

Really? So what we have here is a Fox News host and political contributor asserting that Bannon’s sentence is just the sort of “tyranny and total bullshit” that Republicans should engage if they manage to achieve a majority in Congress next month. Good to know. Although that has been the clear objective of the GOP for decades, it is rarely admitted so openly. And the same sentiment is being proudly expressed by many other disciples of Trumpism…

I knew one of them would go here. Didn’t know which one, but I knew it was coming. pic.twitter.com/OUzpjjWQnq

Every freedom-loving American should hold Congress in contempt. I stand with Steve Bannon.

I stand with Steve Bannon! pic.twitter.com/8EyOOEJQ1P

Make no mistake about it, Republicans are steadfastly pro-tyranny and anti-democracy. They refuse to accept any electoral outcome wherein they are the losers. They are actively striving to steal future elections via gerrymandering, phony electors, suppressing voter access, and gaining control over vote counting operations.

What’s more, they have explicitly stated that they will purposefully cause great harm to the nation in order to get their way. Which makes it all the more imperative that Democrats show up on or before November 8 to cast their ballots for preserving American democracy. Because that’s what is at stake.

5 thoughts on “Fox News on Steve Bannon Sentence: It’s Tyranny and Total BS – And We Need to Do It”