The Senior White Nationalist at Fox News, Tucker Carlson, continues to preach his noxious brand of unabashed racism every night on his cable “news” program. And with each episode he becomes more brazenly contemptuous and uninhibited in unleashing his hate speech. 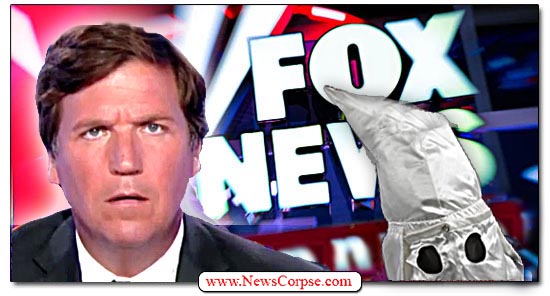 When he isn’t sucking up to Vladimir Putin or Donald Trump, Carlson devotes his airtime to insulting women and minorities. This week Carlson escalated his rancid rhetoric to wartime levels as he sought to malign Tiffany Cross, a Black political analyst and author who hosts a weekend program on MSNBC. Carlson’s harangue was typical of his loathsome dialogues that routinely display his undisguised bigotry and misogyny.

RELATED: Tucker Carlson Maligns Women and People with Disabilities in the Most Cringeworthy Clip of 2022

In this week’s tirade, Tucker was triggered by a segment on Cross’ show where she pointed out that much of the media attention on the January 6th insurrectionists was focused on men and groups such as the Proud Boys and the Oath Keepers. What Carlson found so offensive is that she asked one of her guests about the role of MAGA women in the movement. So Carlson raged that…

“So it’s not just whites, it’s white women. ‘Their women are bad too.’ The women, of course, are the key to reproducing the white race, which is clearly a threat, as she says again and again to you and your family. They’re dangerous. They want to hurt you. Now, don’t be fooled by the fact that Tiffany Cross can barely speak a coherent sentence. She was a communications major, apparently, according to the internet. That didn’t work.”

Got to be one of the most racist things on US TV in 50 years. Carlson talking about white women "as the key to reproducing the white race," and claiming black people are targeting white women for that reason.

Adds that a black anchor "can barely speak a coherent sentence." pic.twitter.com/OI8H2lLowB

Carlson is adopting a old trope among the Klan Kommunity that reduces the role of White women to baby making machines whose sole purpose is to advance the white population and subsequent power.

However, Carlson doesn’t stop there. He is also insulting Cross as “incoherent” and distorting her words to accuse her of denigrating all White women as “dangerous” and, in a longer clip, as “domestic terrorists.” Of course, Cross never said anything close to any of that.

What all of this deliberate distortion on Carlson’s part was leading to was his inner yearning for a race war. He said it explicitly in the segment asking and answering his own question, “What kind of country do you live in? Well, we’re a country at war with itself. A race war.”

This is the kind of hyperbolic hogwash that is spewing daily on Carlson’s show, as well as many of his Fox News comrades. And it is apparently approved by the network’s executives and owners, because they never do anything to rein it in. The entire enterprise has a mission that is reprehensible and dedicated to dividing the American people and to fomenting hatred. They pursue that mission with lies, disinformation, slander.

And no one does it better than Fox’s primetime racist and misogynist, Tucker Carlson. If it weren’t so sick, it could be funny.