In the wake of the 2022 midterm election’s fabled “Red Wave” that never materialized, the Republican Party is drifting aimlessly as they try to pretend that they weren’t all aboard Donald Trump’s Titanic electoral catastrophe. 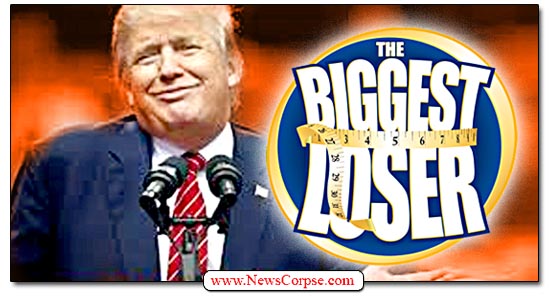 Now Trump is sinking to new lows at a time when historically the party in the White House loses dozens of seats in Congress and state offices. That didn’t happen this time, and it’s evident that Trump is the reason why. Voters abandoned him, and the flotilla of feckless hopefuls that he endorsed, in droves. True to form, Trump went berserk at having been fingered for the fiasco he caused.

Trump’s responsibility for the GOP’s implosion was affirmed in a new poll, as reported in The Hill…

“Voters and Republican operatives alike are labeling former President Trump the biggest loser of the midterms, raising questions about his strength heading into 2024.

“In a Harvard CAPS-Harris Poll survey released exclusively to The Hill on Monday, 20 percent of voters said Trump was the clear loser after the Nov. 8 elections, while 14 percent said “MAGA Republicans” were and 12 percent pointed to mainstream Republicans.”

In all, nearly half of the poll’s respondents (46%) placed the blame squarely on Trump or his mutation of the Republican Party. Although that wasn’t much of a revelation. Trump had already lost the presidency once. He lost the popular vote twice. His two impeachments continue to hang over his losing legacy. And he is the subject of several civil and criminal investigations. No wonder 65% of registered voters don’t want him to even run in 2024.

By contrast, the same poll found that only “15 percent said Democrats were the biggest losers,” and that only “46 percent of respondents … said they would vote for him if the Republican presidential primary were held today.” That’s just Republicans.

Ironically, Trump posted a comment Tuesday morning wherein he was “thrilled” that nearly half of his own party would vote for someone else in a primary. But despite this foreboding future for the Former Guy, Trump is articulating a delusional account of the election results. He posted the following comment exalting himself and MAGA on his floundering Twitter ripoff, Truth Social…

“Joe O’Dea lost his race in CO by over 12 points because he campaigned against MAGA. Likewise, candidates who shifted their ‘messaging’ after winning big in the Primaries (Bolduc!) saw big losses in General. Will they ever learn their lesson? You can’t win without MAGA!”

Of course, what Trump is yammering about is diametrically opposed to reality. It was the MAGA candidates who lost, including Lee Zeldin (New York), Doug Mastriano (Pennsylvania) Dan Cox (Maryland), Tudor Dixon (Michigan), Mehmet Oz (Pennsylvania), etc.). And it was those few who distanced themselves from Trump who won, including Brian Kemp (Georgia), Steve Sisolak (Nevada), Ron DeSantis (Florida), and Mike DeWine (Ohio).

Clearly MAGA is an anchor around the necks of GOP candidates. But Trump is too wrapped up in his malignant narcissism to notice. And his fawning sycophants at Fox News aren’t helping him when they encourage his psychosis with this sort of lunatic analysis…

3 thoughts on “Donald Trump is The Biggest Loser: Post-Midterm Poll Affirms What Everyone Already Knows”