It’s that time of year again. The time when winter’s chill nips at your nose and poinsettia blooms abound. The time when children’s laughter echos through the streets and families come together for joyous feasts. And the time when Fox News lambastes the President and his family for not celebrating the holiday in the manner that they think good American, Christian, patriots ought to. 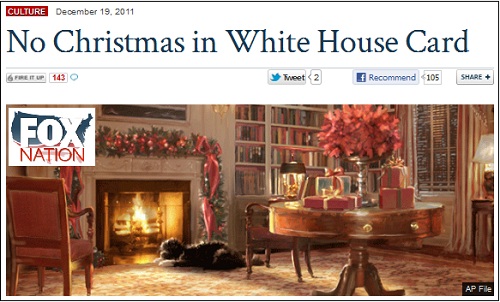 What would the season be without Fox News dredging up this absurd and insulting story as they do every year? It is a tradition that really makes the holiday complete. And this year it is extra special because they brighten it with the cheerful words of Sarah Palin who calls the Obama’s holiday greeting “odd” and “strange,” and, in the spirit of the season, she complains that it doesn’t reflect the…

“…American foundational values illustrated and displayed on Christmas cards and on a Christmas tree. […] It’s just a different way of thinking coming out of the White House.”

Indeed, the current residents of the White House are so “different” than the rest of us. They look different and think different and pray different, but mostly look different. And they express their warm wishes to the nation differently than other “normal” presidents like, for instance, George W. Bush, whose Holiday greetings also didn’t mention Christmas:

Along with the Bush family, Rupert Murdoch declined to mention Christmas in his greeting to the tens of thousands of people who work for him. And Fox News itself aired “Holiday” greetings to their television viewers.

But the cherished holiday tradition of bashing a family for choosing to include people of all faiths (or none) in their hopes for joy and peace and well being, is reserved only for the Obamas. It’s that special treatment Fox saves for those they hate during this season of love.

[Addendum] To complete the hypocrisy, Fox has unveiled their own Christmas card that Palin might also consider lacking the “American foundational values.” In fact, it is downright mean-spirited as it delivers a message of competition and acrimony. 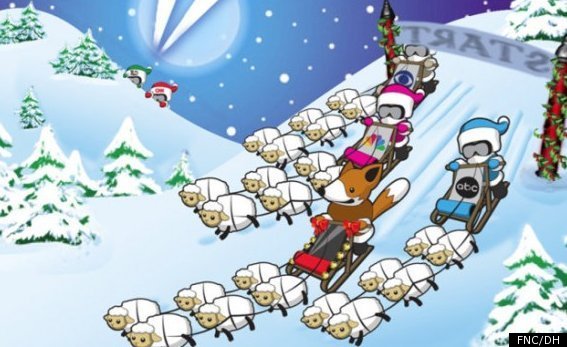 The card mockingly depicts the Fox sled (drawn appropriately by sheep) as winning the race against ABC, NBC, and CBS. What a heartwarming tribute to the birth of their savior, a man of peace and acceptance, who beseeched his followers to love their enemies. And in addition to being self-serving and tasteless, the card is also a barefaced lie. The highest rated program on Fox News (The O’Reilly Factor) has about half the audience of the the lowest rated network news program (CBS Evening News). So the Fox sled should be in the rear, if they cared about telling the truth.