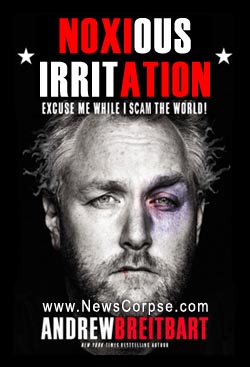 As if Andrew Breitbart’s performance before some Occupy protesters wasn’t pathetic enough, the terminally choleric pundit delivered an incoherent rant from the CPAC podium. He spent much of the time rambling in sentence fragments, struggling to make sense. But one portion of his speech teased what may be his next video crusade. And, no, I’m not talking about the hilariously twisted “Hating Breitbart” documentary that was announced at the conference. I’m referring to Breitbart’s tantalizing claim to have unearthed videos of President Obama in college.

“I have videos. This election we’re going to vet him from his college days to show you why racial division and class warfare are central to what hope and change was sold in 2008. The videos are going to come out, the narrative is going to come out, that Barack Obama met a bunch of silver ponytails in the 1980s, like Bill (Ayers) and Bernadine Dohrn, who said one day we would have the presidency, and the rest of us slept as they plotted.”

OMG! Obama in college plotting with Ayers to become president. That’s blockbuster material. I can just picture it: A twenty year old Obama meeting with the middle-aged Ayers, drafting a scheme that would see Obama elected to the presidency thirty years later. What foresight and commitment they must have had. Especially since they never met until long after Obama graduated from Harvard Law and eventually moved to Chicago where Ayers lived.

It is also interesting that Breitbart would characterize his comrades on the right as sleeping through the eighties. You know, the eighties when Ronald Reagan was president and conservatism was at its peak. That would explain a lot, like how Reagan got elected president in the first place. Little did they know that liberals were holed up conspiring to take over the free world – thirty years in the future – by electing a black man with no birth certificate to the presidency. A brilliant plan that couldn’t possibly fail. It makes you wonder if there might not be a young, undocumented, Mexican atheist currently putting together a plan with billionaire drug lords to occupy the White House in 2040.

For Breitbart to make these allegations involving Bill Ayers is curious since he just attended a dinner party thrown by Ayers a few days ago. Breitbart was invited to the party by Tucker Carlson who paid $2,500 in a charity auction to have dinner with Ayers and his wife Bernadine Dohrn. Breitbart, ever the gracious guest, told Eric Bolling on the Fox Business Network (whose show was just canceled) that Ayers was a great conversationalist, an incredible chef, and a sociopath.

Another guest for dinner, Matt Labash of the Weekly Standard, posted his recollections of the affair with a distinct and buoyant whine about not having had enough time to harangue his hosts. He ate their food (personally prepared by Ayers), drank their wine, and enjoyed a scrumptious desert of apple pie topped with Ben & Jerry’s AmeriCone Dream (the flavor inspired by Stephen Colbert). But apparently two hours and a free gourmet meal is not deserving of appreciation. How rude of the Ayers’ not to take a seat in the dunking booth and allow their rightist guests to harass them for another hour or two about things they did forty years ago.

Which brings us back to the videos that Breitbart claims to have in his possession. If they are anything like the videos he has released in the past, we can be assured that they will utterly lack any truthful representation of events. Like the ACORN videos that were deliberately edited to create false and negative impressions of people who were unselfishly helping low income citizens to vote and find housing for their families. Like the Shirley Sherrod video that was cut to make her look like a racist when the the whole, unedited video proved just the opposite. Breitbart’s history with video exposes is a cavalcade of conscious deceit.

I have doubts that any videos of Obama’s college years will ever actually be released, but if they are it seems unlikely that they will have any relevance this many years later. Breitbart once famously declared that he would “take down the institutional left” in three weeks. That was two years ago. He’s a radioactive bundle of bluster and petulant anger. And even though he has threatened his liberal enemies saying that “We outnumber them in this country, and we have the guns”, I’m not losing any sleep over it.

7 thoughts on “Andrew Breitbart At CPAC: I Have Videos Of Obama In College”