There is no better example of the right’s embrace of idiocy than the rise of Sarah Palin. Conservatives take great pains to refudiate attacks on her intelligence (or lack thereof), but the very fact that they have to rush to her defense so often is evidence of her stupefying ignorance. You never see conservatives forced to defend Karl Rove on those grounds. Liberals may strongly disagree with him but they don’t doubt his IQ.

Palin, on the other hand, is a walking fountain of embarrassing witlessisms. And her keynote speech yesterday at CPAC contributed another mother lode of lunacy. As was to be expected, the bulk of her bluster was aimed squarely at Barack Obama, whom she can only see in terms of evil and strident anti-Americanism. This approach is well received by the simple-minded audience at CPAC that regards cracks about community organizing as worthy of a standing ovation. Surprisingly, the crowd was unfazed by Palin’s use of Satan’s own speaking device: the TelePrompTer. 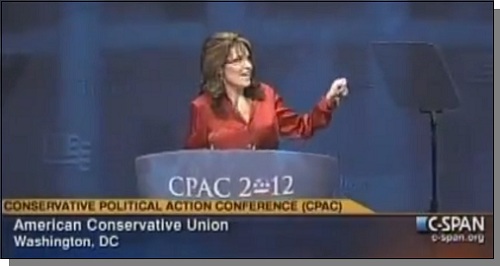 However, Palin saved some of her bile for fellow Republican Mitt Romney. She did not mention him by name, but it was clear to whom she was referring when she said that she hoped the nominating process would continue, even to the convention. And it was likewise obvious that Palin was smacking Romney when she said that…

“Our candidate must be someone who can instinctively turn right to constitutional, conservative principles. It’s too late in the game to teach it or spin it at this point. It’s either there or it isn’t.”

But the real entertainment was spread throughout Palin’s address. While there was virtually nothing of substance, there was an abundance of blatant applause lines that fed the Pavlovian lust of the CPACers. Here are just a few of the most mentally deficient snippets from her harangue:

1) [Obama] promised to transform America, and that’s one promise he kept, transforming a shining city on a hill into a sinking ship.
Remember how shiny America was in 2008 when the McCain/Palin ticket was so soundly defeated? The economy was in free fall, we were bleeding jobs, and there were two wars in progress. Obama took command of this ship after Bush and the GOP had already run it into an iceberg, and he has managed to keep it afloat and steer it back into safer waters.

2) When I listened to his State of the Union last month, I was really struck that he barely mentioned unemployment.
Which State of the Union was she listening to? It certainly wasn’t the one Obama delivered where he mentioned “jobs” 33 times. Her dreadful comprehension skills may explain why she was unable to answer a gotcha question like “What do you read?”

3) He’ll invest your money in bullet trains to nowhere, but he’ll stop Boeing from building airplanes anywhere.
It takes balls for Palin to reference the “bridge to nowhere” that was a boondoggle she supported in her home state of Alaska. And it’s no less ballsy to berate initiatives like high-speed rail that would create jobs and improve the infrastructure for commerce. Also, The NLRB decision to oppose Boeing’s plan to to move their facilities to South Carolina was intended to save the jobs of workers that Boeing proposed to abandon in Washington state.

4) We have a better job plan and it’s called the free market. And it worked before this president, and it will work again after this president.
Well, except for this: 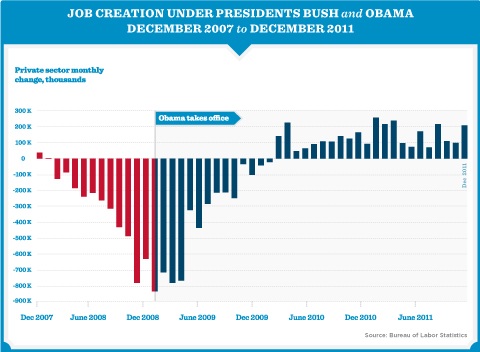 5) He says that we need more of his financial regulations. We say go ask MF Global customers how happy they are with his regulatory agencies. Where were they when Jon Corzine lost $1.2 billion of customer funds?
Exactly! Where were Obama’s regulatory agencies? They were tied up by Palin’s Republican pals in Congress who refused to pass the bills that would create them or to confirm the department heads who would manage them. And isn’t Palin thoughtful for showing her concern about a billion dollars lost by wealthy hedge fund investors, but no such concern for hundreds of billions lost by average American homeowners?

6) We’re gonna put our confidence in the strength of our armed forces, not the hollow promises of our adversaries and not the cleverness of our diplomats and our bureaucrats.
So Palin advocates only military solutions to foreign policy disputes. She just can’t abide clever diplomats that could defuse an international crisis and avoid putting American lives at risk, not to mention saving billions of dollars that would be spent at war. Something tells me that even our armed forces would rather rely on diplomacy first.

7) We’ve suffered massive job losses out there. But Washington is hiring.
Actually, there have been 3,000,000 jobs created in the private sector in the past two years. Government jobs, however, have declined by 2.6% during the Obama administration. That’s a record. Obama has done more to shrink government than even Ronald Reagan.

Sitting through Palin’s speech was an excruciating ordeal. Her screechy whine was itself torturous, but the ignorance infused with every sentence, and the cheers it elicited from the undiscriminating crowd, was like aural tasering. Imagine my relief when she came to the obligatory “God bless America” and the end was in sight. However, the final punch line was her selection of Shania Twain’s “Not Just A Pretty Face” to accompany her exit from the stage. It’s amazing that the ego that approved that song can fit into her miniaturized brain.