Despite the seemingly constant stream of racist propaganda and rhetoric emanating from Fox News, they still manage to exceed their own repulsive standards with ever more dishonest and hateful distortions of the news. After publishing stories that blame Trayvon Martin’s demise on his clothing, and pictures that deliberately seek to put Trayvon in a negative light, Fox has rocketed to new heights of blatant prejudice and painfully perverse journalism.

In Mobile, Alabama, a white man was hospitalized from a beating by a group of African-Americans after a dispute over the use of the street for a game of basketball. The assault was inexcusably brutal and the police are searching for suspects who deserve to be punished to the full extent of the law. But that would not be a sufficiently sensational reaction for the twisted editors at Fox News. They published their stories on Fox News and Fox Nation this way: 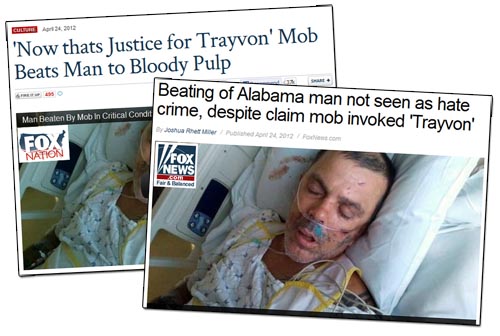 The facts of this crime are fairly clear. It was an extreme overreaction to a neighborhood argument that concerned only the parties involved. It had absolutely nothing to do with the incident in Florida last month where an unarmed teenager was shot to death while walking home from the market. The only connecting factor was the claim by the victim’s sister that she heard one person say “Now that’s justice for Trayvon.” There have been no other witnesses who have corroborated her account, but even if there were the only significance of it would be that one of the perpetrators was a jerk in addition to being a thug.

That’s not how Fox News sees it. Their headline at Fox Nation veritably declares that the hoodlums who committed the assault were a “Justice for Trayvon Mob,” as if it were a political statement emanating from the Florida incident. Nothing in the facts of this crime point to that in even the most remote sense. The headline on Fox News itself states matter-of-factly that the “mob invoked Trayvon.” However there is only one unconfirmed report that a single witness alleged that a single person brought Trayvon’s name into this. That hardly justifies associating the whole mob’s actions with Trayvon. Fox’s headline also implies that this should be designated a hate crime despite any evidence of that being the case.

The entire purpose of these overt distortions is to fuel racial animus directed at Trayvon Martin specifically, and to African-Americans generally. There is a stench of incitement in Fox’s words that suggest their desire to stir up other racially motivated crimes or even full-on race riots. It is horribly irresponsible for a so-called news enterprise to sink to these depths of cynicism and antagonism.

From the very beginning of the Trayvon Martin incident, Fox News has tried to advance the impression that African-Americans are animals on the verge of erupting into violence. Fox has suggested that riots would occur if George Zimmerman were not arrested, or if he were not convicted. The view at Fox is that African-Americans are incapable of respecting the progress of justice. And even when no riots ensue, Fox can sit back smugly and celebrate having created the impression that civil unrest was narrowly averted.

It’s a good thing that African-Americans (and most Americans in general) are far more civilized than the bigoted neanderthals at Fox. These brazen tactics are designed to manufacture potentially dangerous hostilities and are more at home in the quarters of Klans and racist militias. How Fox News gets away with this is unfathomable. Their audience should find it revolting and their peers in the press should speak out against this sort of noxious activism. Although it is unlikely to succeed, it certainly can’t help. This isn’t news, it’s hate speech.