The headline story on Fox Nation today calls the President’s Jobs Council a fraud. There is nothing in the story that indicates what the nature of the alleged fraud is, but the charge stills hangs there like rotting fruit. 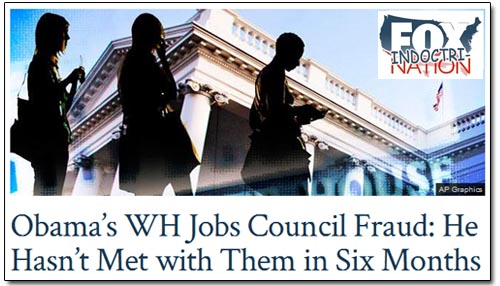 The root of the complaint has something to do with the frequency with which President Obama meets with the White House Jobs Council. The Fox Nationalists appear to be upset that he doesn’t do it often enough. Coincidentally (wink), that’s the same theme that Mitt Romney has been pitching on the campaign trail recently.

But here’s the thing. The Jobs Council has mostly done its work already. They issued a report with some specific recommendations. Those recommendations have been addressed by both the administration and Congress. The White House has acted on 54 of the 60 recommendations for executive action. Congress passed the JOBS Act which contained many of the ideas proposed by the Council. There are many other proposals that Republicans in Congress are blocking because they are more focused on making Obama a one-term president than they are on helping Americans get back to work.

It’s ironic that Romney and Fox are so concerned with the meeting schedule of a Council that they so fiercely opposed. They have rejected many of its recommendations and they were never particularly fond of its formation. Fox News in particular was maniacally critical of its chairman, Jeffrey Immelt of General Electric. Bill O’Reilly called him “a despicable human being” on the air. So it’s rather peculiar that they are now upset that Obama hasn’t spent more time with them. Of course, if he did meet more often they would be crticizing that.