There have been numerous polls asking respondents to say who they hold responsible for the state of the American economy. In every one of them George W. Bush ranks at or near the top, with Congress and Wall Street following close behind. Usually President Obama is not the target of most of the blame.

Leave it to Fox News to come up with a poll that contradicts the others. And it should come as no surprise that the poll they’ve latched onto is the work of Rasmussen’s Pulse Opinion Research. However, even with a fixed pollster, and a rabidly partisan news outlet, Fox still finds it necessary to outright lie about the poll’s results: 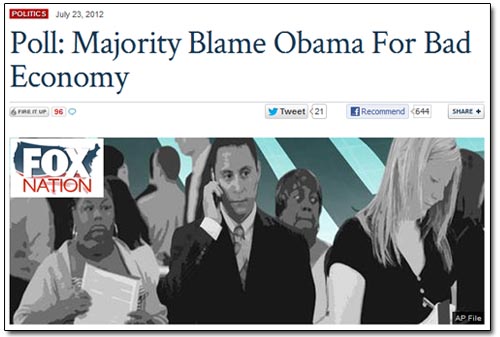 The headline of this article is blatantly false. In Rasmussen’s poll 34% said that Obama is the most to blame for the slow economic recovery. Most elementary school graduates know that that is not a majority. What’s more, if you add the responses of those who said that it was either Congress, Wall Street, or George W. Bush, it comes to a clear majority of 61% saying that Obama is not to blame. Some other significant results from the poll that Fox Nation declined to report are…

And that’s the poll that Fox Nation managed to feature on their website with a headline blaring that a “Majority Blame Obama For Bad Economy.” The Fox Nationalists must take great comfort in the knowledge that their audience is too stupid to actually look into anything themselves – or understand it if they did.

One thought on “Fox Nation vs. Reality: Who’s To Blame For Bad Economy?”