It’s time that we stop using language that disguises the atrocity of devices whose only purpose is to fill cemeteries with corpses. What people often refer to as “assault” weapons would be more accurately described as “homicide” guns. They are used for killing people, period. They have no sporting function whatsoever. And those who assert that access to these weapons is somehow a paramount right of Americanism are delusional. Our founders never anticipated anything with this sort of destructive force being placed into the hands of civilians.

The two most commonly argued positions in support of homicide gun ownership are easy to rebut. That’s because they make little sense.

First of all, homicide gun advocates believe that if someone is intent on harming others, he will find a way to carry out his monstrous mission whether guns are legal or not. That is a wild and unsupportable assumption. Perhaps some prospective mass murderers might be determined and resourceful enough to carry out their plans no matter what legal obstacles they encounter. But more likely they will be impeded and perhaps thwarted entirely.

Most people would not know where to begin looking for black market arms. And in the pursuit of such contraband they could raise suspicions that result in their capture and arrest before they could ever harm anyone. Here is an example of just such a case wherein the perpetrator was discovered, monitored, and apprehended, precisely because he was seeking unlawful weapons. So it’s a lie to say that this person would have been able to carry out his plan despite the law. Given the proper legal tools, more of these miscreants can be taken off the streets before blood is running in them.

Those criminals who fail to acquire the artillery they desire may still be dangerous. The lack of homicide guns may not completely deter someone from committing a crime. But a rampaging maniac with a knife or a common handgun would be much easier to subdue and would cause far less harm.

The second lie is one that is now being regurgitated by homicide gun advocates incessantly. They assert that if someone in the theater in Aurora were armed, he would have been able to end the massacre. That’s another wild and unsupported assumption. If a moviegoer were to have stood up and started firing in a dark theater filled with tear gas, he would probably have done more harm than good. His bullets might very well have found innocent victims. He would have drawn the fire of the perpetrator which would likely have killed him and all those seated adjacent to him. And he would have had zero chance of bringing down the gunman who was covered, head to toe, in body armor. A citizen with a handgun would be no match for a shielded attacker with multiple semi-automatic weapons.

We have an obligation to make our society as safe as possible without imposing on our liberties. Rational legislation that takes military grade weapons off the streets does not violate the Constitution. Anyone who argues that the “right to bear arms” includes machine guns, must also believe that it includes grenades, missile launchers, tanks, or even nuclear arms. Where do they draw the line? How about we not permit civilians to be better armed than the police we pay to protect us?

A famous advocate of these deadly weapons had something to say about this debate not too long ago in a message to his comrades:

“America is absolutely awash with easily obtainable firearms. You can go down to a gun show at the local convention center and come away with a fully automatic assault rifle, without a background check, and most likely, without having to show an identification card. So what are you waiting for?” Al Qaeda spokesman Adam Gadahn (aka Azzam the American). 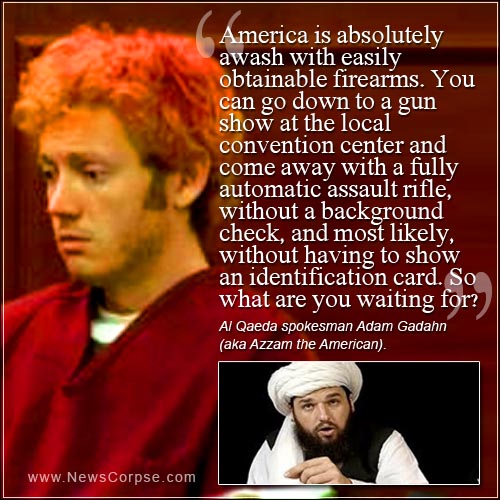 If our terrorist enemies recognize the flaws in in our national security, maybe we should be doing something about it. Perhaps if we stopping calling the efforts to get homicide guns off the streets “gun control” and started calling it “massacre prevention” we could get somewhere.